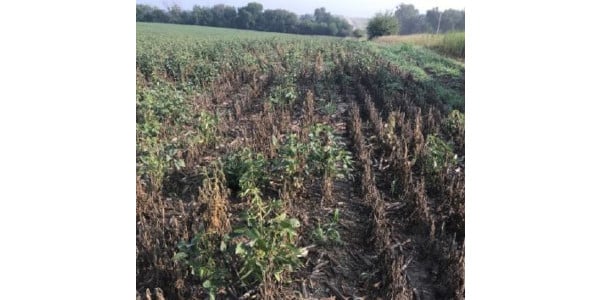 LEXINGTON, Ky. — The soybean gall midge, Resseliella maxima (Diptera: Cecidomyiidae), is a relatively new pest in soybean. Although some findings have been reported since 2011 (CropWatch), large populations were noticed in plants located at the edges of soybean fields by late June of 2018 in Iowa, Nebraska, Minnesota, and South Dakota (Figure 1); a total of 65 counties were affected in these states. A recent report showed that soybean gall midge is spreading rapidly, reaching 144 counties by September of 2020, including two western counties in Missouri (Atchinson and Holt) (Figure 2). Thus far, the soybean gall midge has not been detected in Kentucky.

In 2018 and 2019, infestations were much earlier than previous reports. In late June, infested soybean plants were already showing signs of necrosis and wilting, and there were documented yield losses up to 90% to 100% in those border plants, and yield loss averages reached up to 30% in some infested fields in 2018.

Affected soybean plants have dark marks in the stem near the soil surface (Figures 3a and 3b) that can extend up to the unifoliate node. Symptomatic plants easily snap off near the soil surface, and white to orange maggots can be found feeding within the darkened area of the plant stem (Figure 4).

Eggs are laid at the base of soybean plants at the V3 stage or later, and larvae (1/8 inch or less than 3 mm) enter stems. It has three larval instars. At the 3rd instar, soybean gall larvae overwinter in the soil as silken cocoons that pupate in late spring. Adults start to emerge in early to mid-June and can be seen for 6 to 8 weeks in the field in Nebraska. Adults are small slender flies, ¼ inch (6 mm) in length (Figure 5). They can be recognized by black-and-white stripes on their legs, orange abdomens, and mottled wings; however, adults are rarely observed in soybean fields. Current research suggests that this insect has at least two generations per year in the Midwest. To have an idea of its size and body shape, the soybean midge is in the same family (Cecidomyiidae) as the Hessian fly, Mayetiola destructor and the sorghum midge, Contarinia sorghicola; in both species the adults are 1/8 and 1/10 inch long, respectively.

The soybean gall midge is an insect that is difficult to manage due to its feeding behavior. The midge or larva dwells inside the stem where it feeds on inner tissues and is protected from pesticides (Figures 2 and 4). Insecticides used to control this pest are limited. Research conducted in Nebraska by Dr. Justin McMechan in 2019 showed that pyrethroid insecticides applied within 10 days of adult emergence may yield benefits. However, adult flies (Figure 5) have a prolonged emergence period, thus repeated applications of insecticides can be economically costly.

Cultural practices can be tools that may be used by farmers. McMechan reported in 2019 that late planting soybeans (late June) did not show infestations compared to earlier planting dates in Nebraska. He reported that maturity groups 1 and 2 showed visible signs of damage at or near the soil surface, whereas groups 3 and 4 showed signs of plant damage in the axils of the trifoliate leaves approximately 6 to 8 inches from the soil surface.