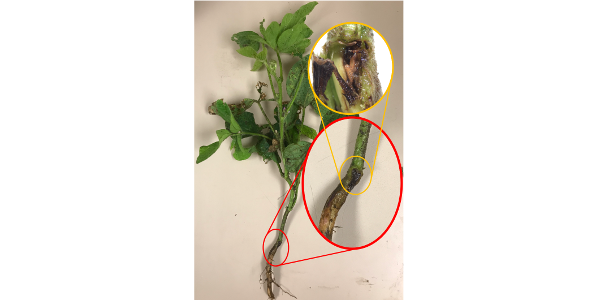 Figure 1. Soybean plant with dark discoloration at the soil surface. Dissection of this area shows two larvae, assumed to be in the third instar. (Courtesy of UNL)

LINCOLN — East Central and Southeastern Nebraska Growers — On June 25, larvae suspected to be soybean gall midge were found in soybean plants at the Eastern Nebraska Research and Extension Center near Ithaca. Figure 1 shows a soybean plant with dark discoloration near the soil surface. Dissection of the plant showed orange larvae feeding within these damaged areas.

Photos were also submitted by grower Trevor Houghton showing orange larvae feeding within soybean plants near Nehawka in east central Nebraska. The discovery of these larvae already feeding within the plants closes the window on the likelihood that foliar insecticides will control soybean gall midge in this area. We suggest that growers with fields south of the Eastern Nebraska Research and Extension Center not apply an insecticide, as it is unlikely to have any effect on soybean gall midge. Low levels of emergence are still occurring at some trap locations, but numbers have declined significantly in the past few days.

No soybean midge larvae were found in soybean plants in northeast Nebraska fields near Randolph and Belden. Insect phenological events here (e.g., corn rootworm egg hatch and adult emergence) are typically one week to 10 days behind the Eastern Nebraska Research and Extension Center (Ithaca), so it is likely that soybean gall midge adults, and possibly larvae just emerging from eggs, are vulnerable to foliar insecticides.

This is a very new pest, and we have no research-based management recommendations; however, because the midge is most frequently an issue along field edges, we have farmer cooperator studies that employ insecticide treatment around the edges of soybean fields. For example, fields receive one pass, 120-foot deep into the soybean field, with an insecticide with residual activity. The objective of such studies is to protect the field from soybean gall midge by preventing the first generation of midges from establishing along the edge of the field. Soybean fields that are adjacent to or very near fields that had high infestations of soybean gall midge in 2018 may benefit from such a foliar insecticide treatment, if application occurs within the next few days. Once most eggs hatch and larvae enter the plant, insecticide treatment will be unlikely to have an effect.

A new era of Purina starters