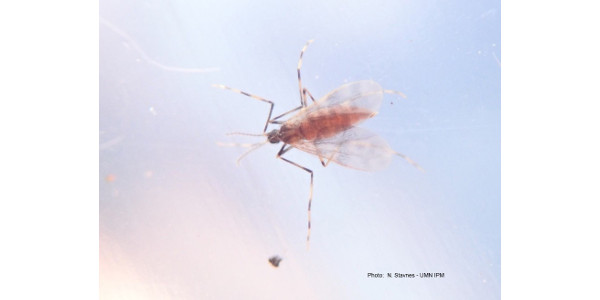 MINNEAPOLIS — As part of a multi-state project funded by the soybean checkoff, three adult soybean gall midges were captured between June 17 and June 20 in emergence cages placed in a field in Rock County, MN. Another adult was captured in that field between June 20 and June 24.

This was one of three Rock Co. fields, infested with soybean gall midge during 2018, where we are currently tracking emergence of this pest. The other cages located in this county and elsewhere in Minnesota (Olmsted, Stearns, Ottertail, Wadena counties) have not yet detected adults.

Compared to some of the fields in nearby states that were heavily infested in 2018, these Minnesota captures are low. However, not all heavily infested fields located outside Minnesota have produced large captures in emergence cages this year. Soybean gall midge adults are tiny. Excluding the long legs, the bodies of the specimens we have captured are less than 1/8 inch long. Their slender bodies are smaller than the gnats that plagued much of southern Minnesota this spring. Because of their small size, it is doubtful you will notice these insects in soybean fields or your sweep net samples. If you do suspect a soybean gall midge adult, look for the very small size, reddish abdomen, and light and dark banding on the legs.

Soybean gall midge larvae have already been observed in the lower stems of some Nebraska and Iowa soybeans. A darkened area of the lower stem near the soil is an initial clue to the possible presence of the small white to orange larvae under the epidermis of the stem.

What does this multi-state soybean-checkoff-funded research mean for Minnesota soybean production?

This research confirms that this newly described insect, Resselliela maxima, was able to overwinter in our soils, presumably pupating this spring, and emerge as adults. It also appears that the emergence pattern of soybean gall midge is roughly following the progression of degree-day accumulations from south to north.

Fortunately, Minnesota has not experienced as many fields with severe damage as Nebraska, Iowa, and South Dakota. In these other states, some farmers with a history of significant damage from this insect may be experimenting with an insecticide application timed at adult emergence. Because this is a new pest, information on insecticide control of this insect is limited. To help answer management questions, a small insecticide experiment was initiated in soybeans adjacent to the Minnesota field with observed soybean gall midge emergence. At this time, insecticide use for soybean gall midge is not recommended in Minnesota.

As adult emergence declines, research efforts will shift to determine the number of gall midge generations produced per year and identifying soybean plants with symptoms of infestation. Will we see more or less damage than 2018? Where will it show up? Your observations can provide valuable help with these questions and more.

Are your dairy cows ready for summer?