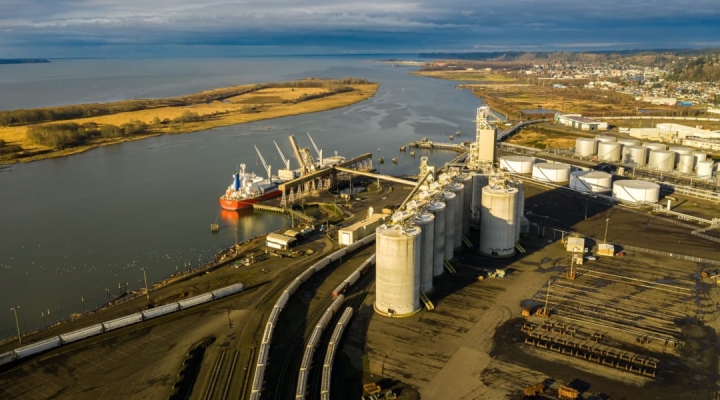 LINCOLN, Neb. — One of the most dynamic developments within the soybean industry in recent history has been the proliferation of current and planned expansion of soybean processing throughout the United States – largely inspired by the demand for soybean oil as one of the primary feedstocks for the expanding renewable energy market. These current and planned investments present a profound question, “With all of the future processing, how can we most effectively access markets for the increased soybean meal?”

A group of soybean farmer organizations are helping provide an answer to this question by assisting a future investment that will significantly enhance the amount of U.S. soybean meal exported to international customers.

AG Processing, Inc. (AGP), the Omaha-based cooperative that owns and operates 10 soybean processing facilities in the Midwest, announced on March 22 a major expansion and upgrade to its export terminal at the Port of Grays Harbor in Aberdeen, Wash. AGP plans to construct additional storage at its Terminal 2 facility and develop a new ship loader at Terminal 4. These investments – scheduled to be operational in 2025 – will ultimately allow the AGP terminal to increase soybean meal exports from 3 million to 6 million metric tons. In order to accommodate this growth and investment, the Port of Grays Harbor will expand its rail infrastructure within the complex to efficiently handle the increased volume, as well as mitigate the surface traffic impact to the local community.

Given the profound benefit these planned investments will provide to a significant number U.S. soybean farmers, the Nebraska Soybean Board, the Iowa Soybean Association, the Kansas Soybean Commission, the North Dakota Soybean Council, the South Dakota Soybean Research and Promotion Council, and the Soy Transportation Coalition have committed $900,000 to help offset some of the pre-engineering, design, and site development costs of the Port of Grays Harbor Terminal 4 Expansion and Redevelopment Project.

“With more future soybean processing in this country, farmers are very interested in opportunities to assist with the increased need for soybean meal export capacity,” says Jonathan Miller, a soybean farmer from Island, Kentucky, and Chairman of the Soy Transportation Coalition. “The more we can export a higher value product, like soybean meal, farmers will benefit. I am proud of how these soybean farmer organizations are demonstrating their commitment to their fellow producers by making this significant investment.”

“Over the past 20 years, AGP has been an excellent partner, and we are excited to continue to collaborate with them on this major expansion,” says Gary Nelson, Executive Director of the Port of Grays Harbor. “We are extremely pleased and grateful to receive this generous support from soybean farmers. It will clearly enhance this project as it moves forward. We look forward to the Port of Grays Harbor becoming an even more significant economic engine for not only our local and regional community, but also soybean farmers throughout the country.”

“AGP’s previous and future investments at the Port of Grays Harbor are motivated by the commitment to provide efficient and economical access to international markets for U.S. soybean meal,” says Chris Schaffer, Chief Executive Officer of AGP. “For many years, this export terminal has served as a vital link between AGP farmer-owned cooperative members and critical international markets. We very much appreciate the financial commitment from the soybean farmer organizations to support AGP’s efforts to enhance and upgrade the port’s export capabilities.”

“What happens over there impacts what happens over here, and what happens over here impacts what happens over there,” explains Mike Steenhoek, Executive Director of the Soy Transportation Coalition. “It is well-established how investments in the Pacific Northwest will result in greater farmer profitability in the Midwest. In turn, profitable farmers in the Midwest result in increased investment in the Pacific Northwest. AGP’s expansion project at the Port of Grays Harbor is arguably the most immediate opportunity for soybean farmers to assist with the need for increased soybean meal export capacity. The Soy Transportation Coalition and other farmer organizations are pleased to partner in this important project.”

Established in 2007, the Soy Transportation Coalition is comprised of 13 state soybean boards, the American Soybean Association, and the United Soybean Board. The goal of the organization is to position the soybean industry to benefit from a transportation system that delivers cost effective, reliable, and competitive service.