“We were really excited to have so many farmers and friends of the industry join us in Topeka,” said KSA Second Vice President Teresa Brandenburg, Osborne, who chaired the Expo planning committee. “It was a great day to network and advance the association’s and commission’s commitments to producer education.”

The keynote speaker, farm-boy-turned-comedian Roger Radley, entertained the audience with his wit, humor and stories about growing up on a Wisconsin farm and how we raise kids today.

“Roger was very entertaining, and you never knew what direction he was headed with the next line,” said Charles Atkinson, Great Bend, KSA’s representative on the American Soybean Association (ASA) board of directors and a member of the Expo planning committee. “His presentation was a great reminder that if you can’t look in the mirror and get a good laugh to laugh with somebody else.”

John Jenkinson, Lakin, a farm broadcaster for KSN News and markets editor-anchor for RFD-TV and Rural Radio on Sirius XM, was the master of ceremonies at the luncheon. The featured speaker was Donnell Rehagen, CEO of the National Biodiesel Board (NBB). He emphasized how the soybean checkoff always has ensured the biodiesel industry could support its technological development and marketing projects with the proper research. He also complemented the national and state soybean associations for advocating federal policies to help make biodiesel competitive in the marketplace.

To open the awards and recognitions, Brett Neibling, Highland, and Brandon Geiger, Denton, who represented Kansas in the 2017 DuPont Young Leader program, introduced and congratulated Kim and Kevin Kohls, Moundridge, and Jared Nash, Parsons, as 2018 young leaders. Heinen then recognized Marvin Wahl, Oswego, for being KSA’s top recruiter in 2017.

The Friend of Soy award went to Harold Kraus, Hays. He served on KSC from 1999 to 2011 and was its first representative to NBB, serving there from 2001 to 2013. When he started, biodiesel was in its infancy, and it was a billion-gallon industry by the time he retired. His dedication to developing biodiesel helped make it America’s first domestically produced, commercially available advanced biofuel, and NBB gave him the Friend of Biodiesel Award in 2013.

Kraus earned a business degree from the University of Kansas in 1955 then served as a Navy aviator. He and his wife, Virginia, have six children and farm in Ellis County, where he was a county commissioner for 16 years. They continue to host an agriculture day for about 300 students and teachers every year.

Heinen recognized past president Terry Reschke, Hiawatha, for retiring from the KSA board of directors a year ago, after 15 years of service. Maurath thanked Craig Gigstad, Valley Falls, for representing Kansas on the United Soybean Board from 2011 to 2017.

Next, Heinen presided over the KSA annual meeting. Atkinson outlined ASA’s policy successes in 2017 and priorities for 2018. First Vice President Dwight Meyer, Hiawatha, who chairs KSA’s policy committee, presented the guiding resolutions for 2018, which the voting members present accepted. The board elections resulted in Kregg Rennie, Columbus, and Gary Robbins, Emmett, returning as the directors for districts 4 and 5, respectively, and Brandenburg (Osborne) continuing as a director-at-large.

Shoup, who coordinates the Kansas Soybean Yield and Value Contests, then announced the district and overall winners. Meier Farms, Rexford, topped the irrigated division with 100.67 bushels per acre – the first entry ever to document more than 100 bushels. Kenny Wilson, Horton, led the dryland division with 93.34 bushels per acre. Geiger (Denton) won the value contest with 97.8 cents per bushel of increased value (10.7 percent over the $9.68 cash price). Complete results and award photos will be available via http://KansasSoybeans.org/contests on the web. 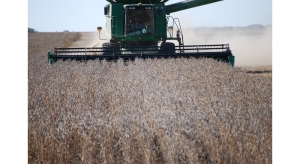