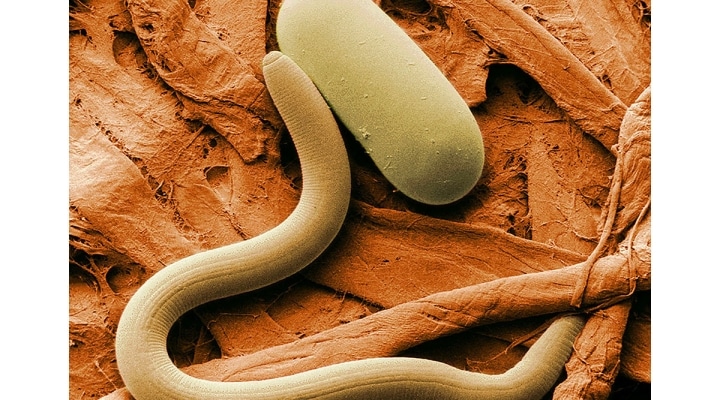 Soybean Cyst Nematode (SCN) is one of the biggest drags on soybean yields in Indiana.  Many people took advantage of a free testing offer, and the Purdue lab is now maxed out! Farmers can still have testing done for $25 per sample, which is still a bargain for the information received. A juvenile nematode is pictured here with an egg. (Photo by USDA-ARS)

GOSHEN, Ind. — A few weeks ago, I wrote about free testing at Purdue for Soybean Cyst Nematode (SCN).   SCN is one of the biggest drags on soybean yields in our area.  Many people took advantage of the free testing and the Purdue lab is now maxed out!

You can still have testing done for $25 per sample, which is still a bargain for the information you will receive back. Future samples need to be shipped to SCN Diagnostics at the University of Missouri.  Their address and contact information is located at  https://bit.ly/3805mEE.

The most effective control for SCN is resistance built into the varieties.  The issue, however, is that almost 96% of the current resistant cultivars is from the same source (PI88788), which has been around for over 30 years.  For instance, of the 849 varieties in Iowa’s States SCN publication, 810 have the PI 88788 trait.  Many populations of SCN are not as affected by PI88788 as they once were.

Soybean cultivars with Peking or PI437654 (CystX®, Hartwig) source of resistance should be used if your SCN population can overcome the PI88788 resistance. It’s one of the reasons we recommend growers do an HG type test of their SCN population every 10 years or if they have never done so in the past. Soybean varieties with the Peking source of SCN resistance yielded 22 bushels per acre more than varieties with PI 88788 SCN resistance in an experiment conducted by ISU in southeast Iowa in 2019.  https://bit.ly/3qQitRn.

Another issue to reduce SCN levels in fields is weed control. Weeds like purple deadnettle and henbit, both common winter annuals here, can sustain the SCN population.   One year in a weed-free non-host crop can reduce an SCN population as much as 55 percent. However, since some of the eggs may remain unhatched in the cyst for years, it is virtually impossible to starve all the nematodes. For more information, I suggest visiting https://bit.ly/3oPluzt.