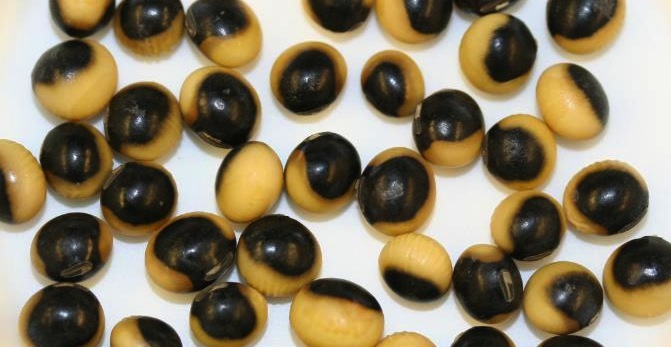 Researchers at the University of Illinois have discovered the molecular mechanisms behind unusual saddle patterns on soybeans. (Lila Vodkin)

URBANA, Ill. — Today’s soybeans are typically golden yellow, with a tiny blackish mark where they attach to the pod. In a field of millions of beans, nearly all of them will have this look. Occasionally, however, a bean will turn up half-black, with a saddle pattern similar to a black-eyed pea.

“The yellow color is derived from a natural process known as gene silencing, in which genes interact to turn off certain traits,” explains Lila Vodkin, professor emerita in the Department of Crop Sciences at the University of Illinois. “Scientists make use of this process frequently to design everything from improved crops to medicines, but examples of naturally occurring gene silencing – also known as RNA interference, or RNAi – are limited. A better understanding of this process can explain how you can manipulate genes in anything from soybeans to humans.”

The RNAi pathway was discovered about 20 years ago as a naturally occurring process in a tiny roundworm. The discovery and follow-up work showing its biomedical potential won scientists the Nobel Prize in 2006. In plants, RNAi was discovered in petunias. When breeders tried to transform one gene to cause brighter pinks and purples, they wound up with white flowers instead. The gene for flower color had been silenced.

“Before they were domesticated, soybeans were black or brown due to the different anthocyanin pigments in the seed coat,” says Sarah Jones, a research specialist working with Vodkin on the study. “Breeders got rid of the dark pigments because they can discolor the oil or soybean meal during extraction processes.”

Vodkin clarifies, “The yellow color was a naturally occurring RNAi mutation that happened spontaneously, probably at the beginning of agriculture, like 10,000 years ago. People saw the yellow beans as different. They picked them up, saved them, and cultivated them. In the germplasm collections of the wild soybean, Glycine sojae, you don’t find the yellow color, only darkly pigmented seeds.”

Previous work from the team showed that yellow soybeans result from a naturally occurring gene silencing process involving two genes. Essentially, one of the genes blocks production of the darker pigment’s precursors. But the researchers weren’t sure why black pigments sometimes reappear, as in saddle-patterned beans. Now they know.

Vodkin and her team searched for beans with unusual pigmentation in the USDA soybean germplasm collection, housed at U of I. The collection contains thousands of specimens, representing much of the genetic diversity in domesticated soybean and its wild relatives.

“We requested beans with this black saddle pattern,” Jones recalls. “We wanted to know if they all get this pattern from the same gene.” Some of the samples had been collected as far back as 1945.

The team used modern genomic sequencing techniques, quickly sifting through some 56,000 protein-coding genes to identify the one responsible for the pattern. The lead author, Young Cho, made the discovery as a graduate student when he noticed a defect in the Argonaute5 gene. The team looked at additional beans with the saddle and found that the Argonaute5 gene was defective in a slightly different way in each of them.

“That’s how you prove you found the right gene,” Vodkin says, “because of these independent mutations happening at different spots right in that same gene.”

When the Argonaute5 gene is defective, the silencing process – which normally blocks the dark pigment and results in yellow beans – can no longer be carried out. The gene defect explains why the dark pigments show up in the saddle beans.

Before the team’s discovery, there were very few examples of how gene interactions work to achieve silencing in naturally occurring systems. Today, bioengineers use genetic engineering technologies to silence genes to produce a desired outcome, whether it’s flower color, disease resistance, improved photosynthesis, or any number of novel applications.

“The yellow color in soybeans could have been engineered, if it hadn’t occurred naturally,” Vodkin says, “but it would have cost millions of dollars and every yellow soybean would be a genetically modified organism. Nature engineered it first.” She says this study also emphasizes the value of the soybean germplasm collection, which preserves diversity for research and breeding purposes.

—University of Illinois
College of Agriculture, Consumer and Environmental Sciences
via EurekAlert!