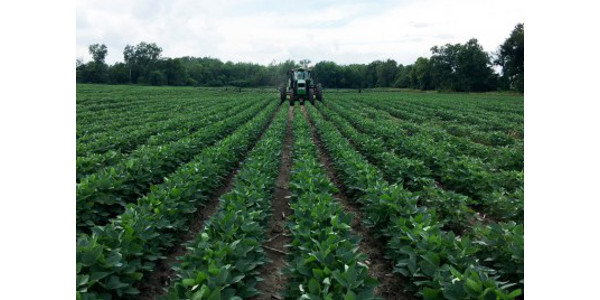 There is a tendency among soybean producers to apply supplemental nutrient sources and fungicides without sound experimental evidence to support such practices. In 2017, a farmer in Perry, Michigan, was interested in the effectiveness of humic acid (Blackmax 22) and fungicide Priaxor in a tank-mixed application to increase soybean yield. (Photo by George Silva, MSU Extension)

EAST LANSING, Mich. — Soybean producers are speculating if nutrient deficiencies and foliar diseases are causing yield limitations in Michigan. There is a tendency among soybean producers to apply supplemental nutrient sources and fungicides without sound experimental evidence to support such practices. In 2017, a farmer in Perry, Michigan, was interested in the effectiveness of humic acid (Blackmax 22) and fungicide Priaxor in a tank-mixed application to increase soybean yield.

This research consisted of three treatments:

The variety was Northrup King 20-T6. The planting population was 140,000 seeds per acre. The trial was planted May 25, 2017. Seed was inoculated prior to planting. The plots were 24 rows wide at 30-inch row spacing. The previous crop was corn. The Blackmax 22 and fungicide were foliar applied at R3 on July 22. The treatments were randomized and replicated four times.

The historical average soybean yield on this ground is about 60 bushels per acre. In 2017, it was drastically reduced to about 43 bushels per acre. Rainfall data (Table 1) shows the lack of rainfall this year at Perry compared to the 30-year average. Soybeans generally depend on August rainfall to boost yield, but the dry spell continued through September. These dry conditions posed less than ideal conditions to assess the efficacy of foliar treatments, particularly in relation to soybean yield.

The soybean yield differences between the treatments were statistically significant at p<0.10 (Table 2). However, humic acid did not affect yield in 2017, rather it was the fungicide. The increased yield of 3.7 bushels due to the fungicide is at the break-even point, cost wise. A point of interest was that there were no visible nutrient deficiency symptoms in the untreated versus treated plots during the season. Likewise, there were no visible differences in foliar diseases. All plots appeared to be equally affected by drought. Although humic acid can be applied via soil, foliar or fertigation, in hindsight the foliar application at R3 may be too late for its season-long effectiveness. Instead, a soil application at planting may provide more time for soil activity in the same year.

These results compared well to a similar trial in 2016 in Mason, Michigan (Table 3). Again, drought conditions prevailed in June and July in that year that slowed initial growth and establishment. However, following excess rainfall in August and September, soybeans recovered and produced excellent yield.

Again, the yield differences in 2016 between the treatments were statistically significant at p<0.10. However the yield increases to foliar treatments over the untreated were not large enough to be cost justified.

Based on the two-year study, there was a consistent yield response to the fungicide, but a consistent response to Blackmax 22 was not evident. Lack of timely rainfall and dry soil conditions can play a role in the effectiveness of foliar nutrients. Decisions to use these products should also include cost justifications. Michigan soybean farmers continue to show interest in using micronutrients and fungicides, particularly in high yielding environments. So there is merit for continuing on-farm research towards identifying site-specific factors and practices that would contribute to more predictable and economic yield responses.

Fertilizer price trends in the second half of 2017