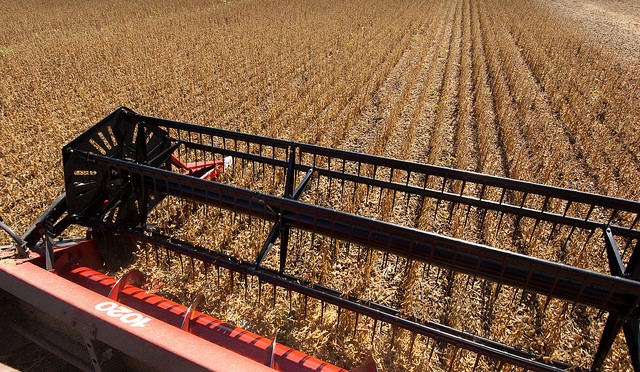 In 2017, China imported 60 percent of total U.S. soybean exports, representing nearly 1 in 3 rows of harvested soybeans, with a value of $14 billion. (United Soybean Board, Flickr/Creative Commons)

WASHINGTON — America’s soy growers are lined up even more precisely in the crosshairs of President Trump’s contentious tariff confrontation with China. President Trump announced Monday that $200 billion in additional Chinese goods will be hit with a 10 percent tariff, deepening the likely free fall in prices that producers of soy and soy products are feeling directly in their wallets and which threaten the stability of their market long-term.

“Soybean prices are declining as a direct result of this trade feud,” said John Heisdorffer, Iowa soybean grower and president of American Soybean Association (ASA). “Prices are down almost a dollar and a half per bushel since the end of May – and continue to plummet. That represents a loss of more than $6.0 billion on the 2018 soybean crop in less than a month. We have approached the Trump Administration repeatedly and implored them to hear our side of this story.”

ASA is disappointed and highly concerned that trade tensions continue to ratchet up rather than deescalate between the two countries and that its repeated requests to the Administration for a non-tariff solution that does not threaten the market stability and livelihoods of soy growers has not been put forward.

Last Friday, China responded in kind to the United States’ 25 percent tariffs on $50 billion of Chinese products under Section 301 of the Trade Act of 1974 with its own 25 percent tariffs on $50 billion of American goods, including soybeans. In 2017, China imported 60 percent of total U.S. soybean exports, representing nearly 1 in 3 rows of harvested soybeans, with a value of $14 billion.