Subscribe
Home / National / Soy growers are fed up with tariffs 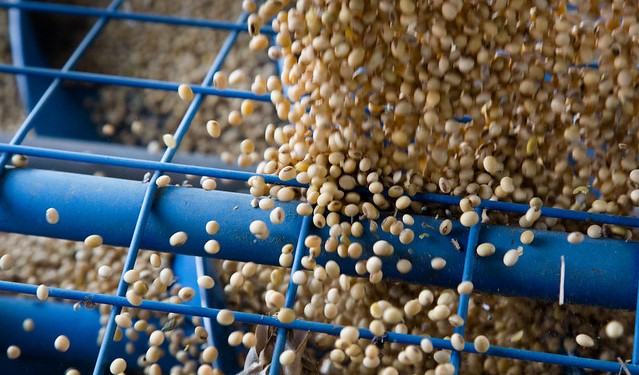 WASHINGTON — U.S. soybean farmers remain frustrated by the lack of progress between the U.S. and China in resolving the trade war, which continues to immediately threaten soy prices and, if not resolved, farmers’ ability to stay in business. The American Soybean Association (ASA) has consistently opposed using unilateral tariffs to address U.S. trade deficits with China and other countries. Instead, ASA supports the negotiation of trade agreements and other measures that can increase U.S. agricultural exports, including soybeans.

“The U.S. has been at the table with China 11 times now and still has not closed the deal. What that means for soybean growers is that we’re losing. Losing a valuable market, losing stable pricing, losing an opportunity to support our families and our communities. These trade negotiations are serious for us. Farming is our livelihood,” said Davie Stephens, soy grower from Clinton, Ky., and ASA president.

The soybean industry realizes the Administration’s reasons for trying to force China to make structural changes to its predatory economic policies, including forced technology transfers, intellectual property theft, and subsidies to state-owned enterprises. Yet, ASA has and continues to recommend that the U.S. achieve these goals through coordinated actions with like-minded developed countries.

“We’ve been understanding during this negotiation process, but we cannot withstand another year in which our most important foreign market continues to slip away and soybean prices are 20 to 25 percent, or even more, below pre-tariff levels,” said John Heisdorffer, ASA Chairman and Keota, Iowa, soy grower. “The sentiment out in farm country is getting grimmer by the day. Our patience is waning, our finances are suffering, and the stress from months of living with the consequences of these tariffs is mounting.”

The Administration decided on May 10 to increase tariffs on $200 billion in Chinese goods, from 10 to 25 percent, in order to increase pressure on China to make structural changes to its economic policies, and is also taking steps to impose a 25 percent tariff on the remaining $325 billion in annual imports from China. In turn, China has announced plans to retaliate. With this further escalation in trade tensions and no end in sight, the situation for U.S. growers is dire.

“The soybean market in China took us more than 40 years to build, and as this confrontation continues, it will become increasingly difficult to recover. With depressed prices and unsold stocks expected to double by the 2019 harvest, soybean farmers are not willing to be collateral damage in an endless tariff war,” said Stephens.

While we support the Administration’s overall goals in these negotiations, ASA cannot support continuing and escalating the use of tariffs to achieve them. Farming is too vulnerable a business to tolerate this much uncertainty over a prolonged period. We call on the Administration to conclude an agreement focused on significantly reducing the U.S. trade deficit with China, including restoring and increasing our agricultural exports and eliminating China’s 25 percent tariff on U.S. soybeans. We would support the use of other tactics to pursue the structural changes the U.S. is seeking in China’s economic policies, including working with like-minded countries.