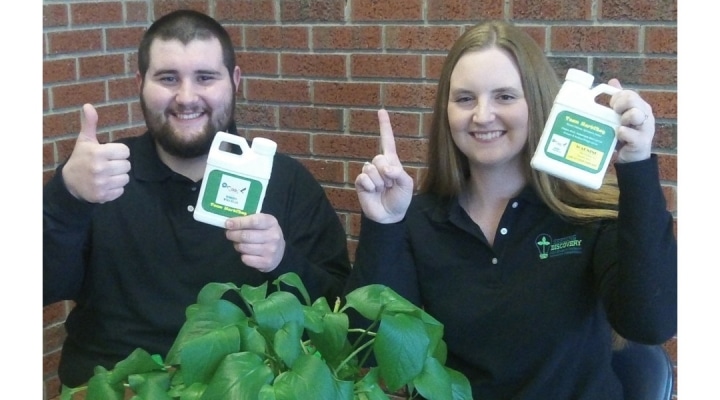 “It’s a general weed killer,” explained Clark, who is a senior from Hillsdale, Ind. majoring in Sustainable Biomaterials Process and Product Design. “We’ve tested it on broadleaf and grasses, and it’s effective on both. Finding the right composition was the hardest thing. We see this as a product that is safe for people to use around their homes, but there is also potential for it to go into the agricultural market as a general burndown.”

This soy-based herbicide differs from other products now on the market, said Chaney, who is a senior majoring in Agronomy. “Our product is non-toxic, kills weeds more quickly and is less expensive,” she added.

More than 52 million U.S. households use herbicides. The total demand for pesticides in 2012 was $14 billion. “I’ve definitely learned a lot about marketing during this project,” Chaney said. “If we only capture 1 percent of the market, our product would be valued at $47.6 million.”

This is the second consecutive year that Chaney and Clark were top finalists. In 2019, the duo earned second place for developing a wood finish made with soy nanocellulose.

The Student Soybean Innovation Competition is sponsored by ISA and Purdue University. Purdue University students are encouraged to develop novel applications for soybeans that meet a market need. This is among the most popular events each year for Indiana’s soybean checkoff.

“ISA is very happy to work with Purdue students in the contest as we look to expand markets for soybeans grown in Indiana,” said Nancy Cline, a farmer from Kirklin, Ind., and assistant chair of ISA’s Grain Marketing and Utilization Committee. “The essence of this contest is to show the versatility of soybeans while addressing people’s needs. The all-natural, non-toxic weed killer has tremendous potential and will likely appeal to customers in the U.S. and around the world.”

This year, 12 teams composed of 36 Purdue University students finished the competition. The participating students represent a variety of majors including food science, engineering, animal science and finance. In addition, each team works with two faculty advisors who provide technical and market research support.

The contest introduces Purdue students to the multi-faceted uses and vast potential of soybeans while drawing on students’ creativity to develop products that utilize soy. Following the contest, ISA works to develop the products, evaluate their long-term feasibility and commercial viability.

“Indiana soybean checkoff funds are used to find new uses and new markets for our soybeans; thereby creating demand and helping our farms to be more profitable and sustainable,” Cline said. “This event allows us to create relationships with bright and innovative students and their mentors at Purdue. Some of the products that evolve out of this contest could potentially have a positive impact on our soybean prices.”

Earning second place, and a $10,000 prize, this year were Purdue sophomores Minghui Deng and Zhiyao Song, both from China, for making a fully digestible, chewing bone for dogs. The soybean and compressed rice bone lasts longer and can also clean dogs’ teeth.

Finishing third, and earning a $5,000 prize is Team SoyFlex, which developed a soybean-based shoe insert. Team SoyFlex includes Junior Hannah Bentley of Columbus, Ohio; junior Melanie Kaplan of Fairfield, Conn.; and senior Nolan Miller of Maple Grove, Minn. The SoyFlex shoe inserts differ from others in the market, because they are antibacterial, machine washable and cost less to produce.

This contest also includes a People’s Choice award of $500, which went to the team that received the most votes on Facebook. Team 60 Soylution won the award by creating a non-toxic and non-cross-linking soy based composite material. The team includes senior Tunn Prasoprat, freshman Isara Tangpoolcharoen, senior Ratchaphak Tantisanghirun and doctoral candidate Thiti Suttiyut, all of Bangkok, Thailand. Their composite material comes in two forms: a soluble support filament for 3D printing and pellets to be used in injection molding. Ideally, the materials would become substitutes for disposable plastic products.

Indiana soybean farmers’ investment in finding new soybean innovations is not limited to the competition. The state soybean checkoff also funds the Soybean Utilization Endowed Chair at Purdue’s College of Agriculture to lead research into new uses for soybeans.

Currently, ISA is working with companies in the concrete industry to market a new soy-based concrete durability enhancer developed through checkoff-funded research at Purdue University. This soy-based product is ideal for concrete roadway infrastructure where protecting the environment is a key requirement or consideration.

Go online to www.indianasoybean.com/checkoff-investments/new-use-innovation for more details on ISA’s investment in soybean innovation. To view the awards ceremony, go to the ISA’s YouTube page at www.youtube.com/watch?v=F-Hy8acp-J8

Start your calves right for a productive life