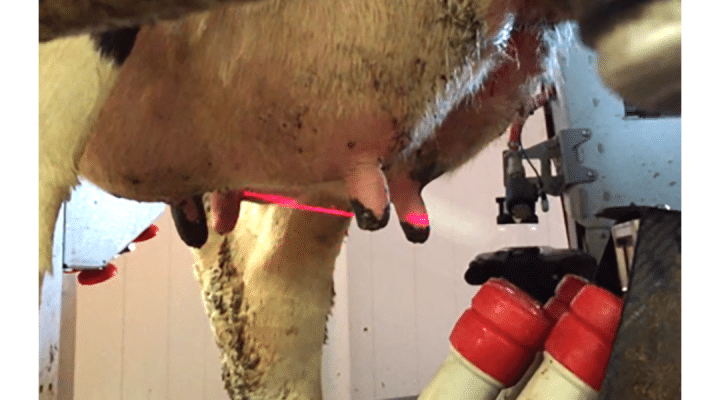 Southwest Dairy Day will feature technology such as this robotic milking machine that emits a laser scan to place the teat cups. (Texas A&M AgriLife photo by Juan Pineiro)

The free event will be from 8 a.m. to 4 p.m. at the Knights of Columbus Hall, 12538 U.S. Highway 281 in Scotland. The event will feature tours of the dairies, sponsor and vendor booths, guest speakers, equipment displays, lunch and more.

“We’re excited about what these dairies are allowing us to offer by opening their doors and showing off their robotic milking systems,” said Jennifer Spencer, Ph.D., AgriLife Extension dairy specialist, Stephenville. “This could be one of the best-attended Southwest Dairy Days we’ve hosted.”

— Wolf’s Legendairy in Scotland. The dairy is owned by Adam Wolf and is the first north central dairy to milk cows with robots. The barn is tunnel-ventilated with foggers in the south entrance of the barn and exhaust fans on the north wall to help dissipate heat and improve cow comfort, health, milk production and reproductive performance. They have 12 robots and milk 50-60 cows per robot.

— Hemmi Family Dairy in Scotland. This dairy is owned by Bryan and Kim Hemmi and their two sons, Cole and Brent, and has been in the family name for almost 100 years. They were previously milking 400-plus Holstein cows in a 45-year-old double six herringbone parlor before retrofitting an existing free-stall barn to include eight robots. They started milking with robots in November 2021. They currently have 450 heifers and 100 calves. The operation grows wheat, coastal Bermuda grass and sorghum.

— Vieth Dairy in Windthorst. This dairy is owned by Scott Vieth, a third-generation dairy farmer. They started milking with robots in January to maximize genetics and added other technology to increase health performance and longevity of the cows. They have eight robots now milking about 500 cows. The dairy also includes feed pushers, rumination collars and water beds. They grow most of their own crops, including wheat, sorghum and sorghum/sudan.

One-hour tours of the three host dairy farms will begin around 8:30 a.m. and go until roughly 1 p.m. Buses will continually pick up and drop off attendees at the dairies and at the Knights of Columbus Hall.

About 50 sponsors and vendors will have booths and displays to showcase their services and products. Thomson Services and DLL Group, financial solutions partners with Lely, are helping sponsor the event.

During the tours, the three showcased dairies will highlight their robotic milking systems and management strategies, all of which differ from each other.

“Robotics in the dairy industry is growing exponentially,” said Juan Pineiro, Ph.D., DVM, AgriLife Extension dairy specialist, Amarillo. “We’re expecting up to 500 people will show up to see cows in barns with milking robots, automatic feed pushers and rumination collars, among many other exciting technologies.”

— Wolf’s Legendairy: Barbara Jones, Ph.D., assistant professor, Tarleton State University, and director of the Southwest Regional Dairy Center, will discuss the use of other precision technologies on close-up cows and within an automated milking system.

For more information, Spencer at jennifer.spencer@ag.tamu.edu or Pineiro at juan.pineiro@ag.tamu.edu. 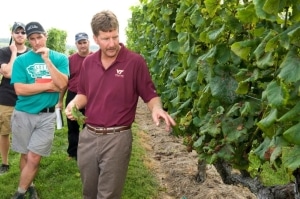 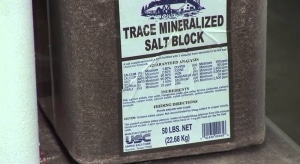