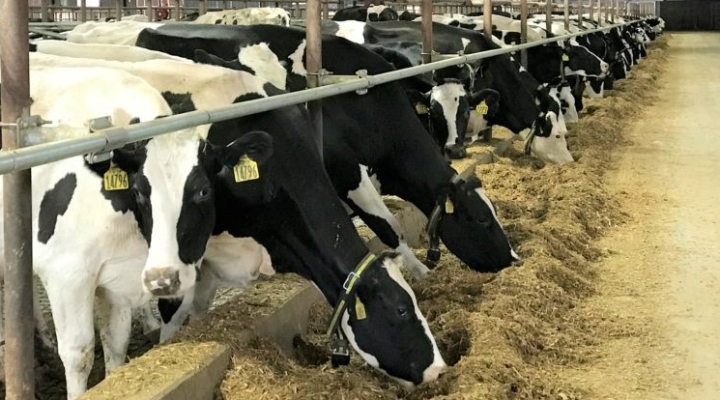 Participants were able to tour the T&K facility and listen to a variety of experts. There was also a tent set up with exhibitors. (Courtesy Photo)

SNYDER, Texas — Mother Nature delayed Southwest Dairy Day with rain, but the rescheduled event Nov. 11 at the T&K Dairy still drew a dedicated crowd eager to see the only fully automatic robotic milking system in the state. The event was hosted by the Collier family and the Texas A&M AgriLife Extension Service.

The free event took place just outside of Snyder and, despite freezing temperatures, over 200 people attended the event.

“I had high expectations for this event since, from an industry support standpoint, it was going to be the second biggest Southwest Dairy Day we’d produced,” said Juan Piñeiro, Ph.D., AgriLife Extension dairy specialist, Amarillo. “Considering the cold and windy weather, I was happy with the attendance and appreciated that people came to the dairy even after we postponed the event and then had a ‘feels like’ temperature of 17 degrees.”

Piñeiro said he felt immense gratitude toward the Collier family for opening their dairy for this educational event and was extremely grateful for the people who participated and the allied industries that came out to support the event.

“Despite the weather I thought the event went very well,” said Jennifer Spencer, Ph.D., AgriLife Extension dairy specialist, Stephenville. “This was our first Dairy Day in this area, and it was very humbling to have all the support we had. It was wonderful for networking, and visiting and watching the interactions truly showed the value of this event.”

Participants were able to tour the T&K facility and listen to a variety of experts. There was also a tent set up with exhibitors. Topics covered by speakers at the event included the use of beef semen on dairy cows, automatic milking systems and radio frequency identification tags, rumination collars, robotic feed pushers, water beds, manure management and irrigating with lagoon effluents.

Many producers came to view T&K’s state-of-the-art operation, which included “water beds” for the cows to rest on, motion-activated spinning “massage” brushes and a cleaning system that automatically flushes the floor with streams of water throughout the day. But the robotic milking system was the highlight of the event for many attendees.

The high-tech dairy barn also featured fans, misters and heaters to keep the animals at a comfortable temperature. The new barn’s technology makes for happy cows and helps to address the issue of labor, said Connie Collier, whose husband Tim started the dairy with his late father Keith in 1982.

Connie and Tim’s son Will, along with wife Lauren, now handle most of the day-to-day operations at the dairy. But with a herd of over 2,000 cows, it takes far more labor than the three-generations of dairy farmers can manage on their own. In addition to the new barn, the Colliers still have a traditional dairy barn as well.

As the only large-scale dairy between Lubbock and Abilene, the Colliers have learned to be forward-thinking and creative when faced with manpower issues.

“It was getting increasingly more difficult to find folks who were comfortable working around cattle and didn’t mind physical labor,” Collier said. “The robotic system allows us to do more with fewer people.”

Cows voluntarily enter the milking chute where their tags are scanned and the information recorded by a computer. If a cow is due for a milking, pellet “treats” are released for her to eat, Collier explained.

Cows may be milked up to three times a day, a process that takes 7 minutes from start to finish. If an animal isn’t due for a milking yet, the chute opens up and she exits without a treat being dispensed.

The water beds were a new concept that the Colliers also decided to try out in their new facility when it opened in August.

“Many barns use sand, but maintaining that is also labor intensive,” Collier said. “These are water-filled mats that have what looks like a little pillow attached at one end.”

Since the amount of rest a cow receives affects the quantity of milk she produces, innovations like the water mats may also help the bottom-line. Other innovations participants got to see at T&K Dairy included rumination collars.

“The beauty of the collars is that we can detect cows that might be in the early stages of getting sick, provide early treatment and improve the chances of a prompt recovery,” said Piñeiro.

“When we started the dairy, I had an index card for each cow where I’d write down her number and then anytime we’d breed or do anything, I’d pull out the card for that cow and write it on the card,” said Collier. “Then we got a computer, but it didn’t have a very good program, then we got a decent program to help us keep track of things. Now we have all this. It is amazing how far technology has come in 30 years, and we’re glad we were able to share it with other farming families and our local community.”

Piñeiro said that he had fun at the event despite the weather and he also thought the participants really enjoyed the tour, facility and presentations.

“I think the speakers – Drs. Barbara Jones, Dana Porter, Jason Smith and Zong Liu – did an outstanding job, and I felt proud to be part of the Texas A&M University System team that made this event possible.”

Spencer echoed his sentiments adding  that for her, the highlights were the support the event received, the ability for so many people in the industry to come together and interact, and the camaraderie forged by toughing out the weather together.