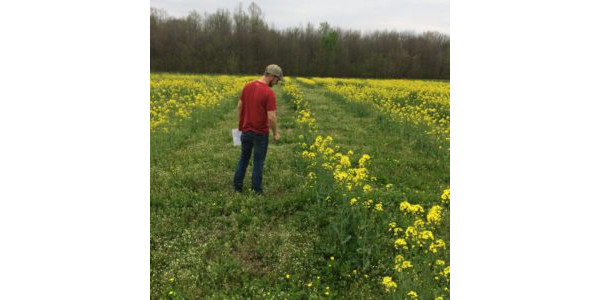 Canola plots were in full bloom during the spring months. (Courtesy of Southeast Missouri State University)

CAPE GIRARDEAU, Mo. — While many know canola oil as one of the best oils for heart health, researchers at Southeast Missouri State University are contributing to that knowledge base by collaborating in the National Winter Canola Variety Trial.

Recently, Southeast’s Department of Agriculture completed harvest of canola test plots at the David M. Barton Agriculture Research Center. Southeast is participating in the study spearheaded by Kansas State University.  The reserach involves evaluating canola varieties based on performance of released and experimental varieties to determine appropriate production locations and to bring awareness of opportunities for winter canola in the United States (For the progress report on canola varieties, visit http://www.agronomy.k-state.edu/services/crop-performance-tests/documents/cotton-canola/2015%20NVT.pdf).

Canola plants produce yellow flowers that, in turn, produce seed pods. Canola seeds are high in oil, which is produced by crushing the canola seeds, said Dr. Indi Braden, Southeast professor of agriculture. More than 40 percent of the seed is oil, making canola oil the main product of canola seed.

Much of the world’s canola production comes from Europe and Canada. With a growing interest for canola oil for the food industry or for biodiesel, exposure to this alternative crop could provide U.S. farmers with a viable winter crop. Currently, production of canola in North America relies heavily on Canada’s farmers, Braden said.

The Barton Center in Gordonville, Missouri, is one of three locations in Missouri and one location of more than 40 in the United States. This is the third year Southeast has participated in the combined variety study. Braden says she hopes Southeast’s agriculture students learn about opportunities with alternative crops and gain experience in applied agronomic research by growing crops in a research trial.  The research plot included three replications of the trial, with 18 varieties planted in random order.

She said the canola study helped students learn how to do small plot research, which required intensive experimental design for planting, management, harvesting, and data collection. Results provided for the trial include stand establishment, winter survival, lodging of the plants, yield and oil analysis.

“Applied field research provides students experience that will be used in industry or when they possibly go to graduate school,” she said.

Millburg said participating in this research “was personally helpful for future use to learn to design a research plot and then how to collect data.”

Curtis Gilliland, a senior agriculture major, plant and soil science option, from Advance, Missouri, said he hopes to be involved in agriculture research in the future and plans to attend graduate school after he completes his degree at Southeast.

“This teaches me how the process works and what I might be looking at in the future,” he said.