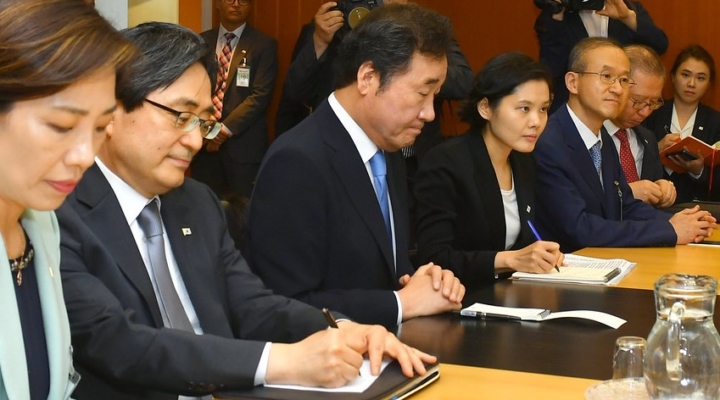 Prime Minister Lee Nak-yon (above, third from left) said wild animals, vehicles or even human travel may be causing the virus to spread. Officials are looking into the possibility that the disease was introduced by wild boars following an earlier outbreak in North Korea. (Stock photo: IAEA Imagebank, Flickr/Creative Commons)

SEOUL, South Korea (AP) — South Korea on Wednesday confirmed a second case of African swine fever near its border with North Korea, raising concerns that the outbreak could spread and wreak havoc on the country’s massive pig herds.

Officials were planning to cull some 5,000 pigs raised at a farm in the town of Yeoncheon after the highly contagious disease was confirmed in tests of a dead pig, a South Korean agriculture ministry official said.

Officials culled nearly 4,000 pigs and stepped up quarantine efforts Tuesday after confirming the country’s first case of the disease at the nearby city of Paju.

African swine fever is harmless to humans but very contagious and fatal for pigs. It has decimated herds in China and other Asian countries and there is no known cure.

There are about 6,300 farms in South Korea that raise more than 11 million pigs.

Prime Minister Lee Nak-yon said wild animals, vehicles or even human travel may be causing the virus to spread. Officials are looking into the possibility that the disease was introduced by wild boars following an earlier outbreak in North Korea.

“I urge you to quickly respond and do whatever you can,” Lee said.

The agriculture ministry said officials also were stepping up disinfection of farms and vehicles and restricting movements of farmers, animals and visitors to contain the disease.

“We will obviously cull the 4,700 pigs raised at the Yeoncheon farm and could cull more pigs at farms in neighboring areas if needed,” said the ministry official, who declined to be named, citing office rules.

Gyeonggi province, which governs Yeoncheon and Paju, canceled a slew of events that had been planned in the towns through October, including a pop concert, a marathon and ceremonies marking the first anniversary of a Pyongyang summit between South Korean President Moon Jae-in and North Korean leader Kim Jong Un last September. A film festival that was to open on Friday at the border village of Imjingak was moved to Goyang city.

The outbreak in South Korea comes after months of heightened monitoring efforts at border area farms after the disease spread to North Korea in May.

North Korea in recent months has virtually scrapped all diplomatic activity and cooperation with South Korea amid a standstill in nuclear negotiations with the United States, and has ignored repeated South Korean calls for joint efforts to stem the spread of the disease.

South Korean investigators are tracing the source of the outbreak, and officials say it isn’t immediately clear if the disease would have crossed from the North.

Seoul’s Unification Ministry, which deals with inter-Korean affairs, said Wednesday that it notified the North of the outbreak in South Korea through a liaison office at a North Korean border town.

South Korea in past months has placed fences and traps around border area farms to prevent pigs from being infected by wild boars that roam in and out of North Korea. Government officials said it would be difficult for the animals to cross over barbed wire fences in the mine-scattered border zone, but they could swim across rivers.

South Korea’s environment ministry said it plans to dispatch personnel to strengthen monitoring on movement of wild boars in border areas and install more traps and nets. The ministry said it asked local officials not to shoot the animals because gunshot sounds could cause them to scurry and cover more ground.