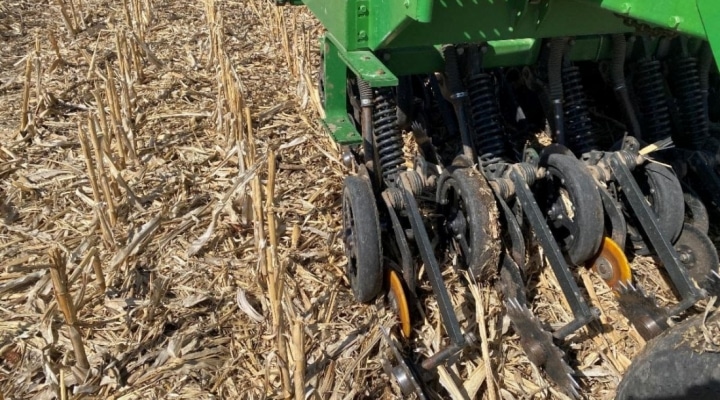 A no-till drill cuts through last year’s crop residue seeding peas into the corn stubble. Those adopting conservation tillage practices, such as no-till, may need to make adjustments or purchase equipment that plants into residue. (Courtesy Photo)

BROOKINGS, S.D. – Sticking to the program pays off.

A survey of producers in central and eastern South Dakota showed a majority of those who have used no-tillage and reduced tillage practices for five years or more have seen increases in profitability through decreased production costs and increases in cash crop yields.

“The longer producers use these practices, the more likely they are to see the benefits of improved soil health,” said assistant professor Tong Wang of South Dakota State University’s Ness School of Management and Economics. Wang is part of a team of researchers analyzing data on the short- and long-term benefits of adopting soil and water conservation practices gathered through the 2018 South Dakota Commodity Crop Producer Survey.

“Conservation tillage reduces soil erosion and increases water infiltration and soil carbon storage,” Wang explained. An article on conservation tillage adoption and reported benefits among South Dakota producers was published in the January/February issue of the Journal of Soil and Water Conservation.

The survey was conducted by SDSU researchers. The research is funded by South Dakota Corn Utilization Council and USDA NRCS to evaluate how farmers perceive the benefits of conservation farming practices, such a conservation tillage, cover crops and diversified crop rotation plans, and how these practices are reducing the industry’s carbon footprint.

Among the 708 producers who responded to the survey, more than 75% had adopted conservation tillage practices. The respondents farmed an average of 1,150 acres with the market value of their agricultural products in the $325,000 to $350,000 range. The respondents were an average of 56.6 years old with 27 years of farming experience.

“This is what was expected because the soil health benefits that impact productivity accumulate over time,” Wang said. “There’s also a learning curve, so the farmers get better at implementing these tillage practices the longer they use them.”

The percentages increased for those using the tillage practice for six to 10 years, with 59.6% reporting a decrease in production costs and 57.3% an increase in profitability. Furthermore, 51.1% saw an increase in their cash crop yield.

Though producers may need to purchase some specialized equipment, Wang pointed out, “fewer passes across the field translates to lower labor and fuel costs as well as wear and tear on machinery.” Those savings may be offset initially by increased chemical inputs, such as fertilizer and pesticide, but as the soil organic matter and microbial activity increases, the amount of nitrogen needed, for instance, may be reduced.

Furthermore, adopters reap the benefits of conserving water in water-stressed regions. Using a modeling estimation, the researchers kept all other factors the same, but reduced the precipitation, Wang explained. When the precipitation decreases by 1 inch, those who use conservation tillage practices are 5.4% more likely to have higher crop yields and 2.8% lower production costs when compared to those using conventional tillage.

As expected, those producers who are more concerned about the environment are more likely to have used conservation tillage for more than 10 years. However, Wang said, “It was interesting to see that respondents who had off-farm jobs were more likely to adopt conservation tillage, perhaps as a way to save time.” Furthermore, they may see implementing these new practices as less risky because they do not rely solely on the farm for their income.

Overall, the research team found that only 6.7% of the respondents have used conservation tillage for less than three years, while 10.6% have been doing so for three to five years. That declining adoption rate is a concern that has led researchers to look at whether an incentive program might further increase adoption rates, Wang explained.

A subsequent survey will look at whether offering incentives, such as carbon credits, to producers will increase adoption rates for conservation practices. Based on the previous survey results, Wang anticipates that monetary incentives will be necessary only during the first several years because most producers begin seeing the impact conservation tillage has on their operations after the initial five years. 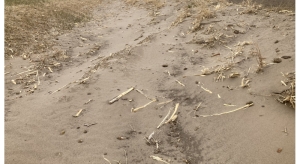