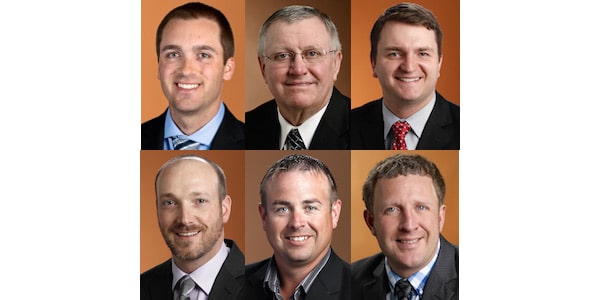 SIOUX FALLS, S.D. — The boards of directors of two state corn organizations have elected officers for 2020.

The South Dakota Corn Growers Association board re-elected Doug Noem of Bryant as president, re-elected Scott Stahl of Emery as vice president and elected Travis Strasser of Wilmot as secretary/treasurer.

The South Dakota Corn Utilization Council board re-elected Robert Walsh of Elk Point as president and elected Grant Rix of Groton as vice president and Justin Minnaert of Madison as secretary/treasurer.

Noem has a diversified crop and livestock operation. He joined the SDCGA board in early 2012. His public service includes serving as a Hamlin County commissioner, president of a local cooperative and member of the Pork Producers public policy committee.

Stahl joined the board in early 2017. He and his family raise corn, soybeans and oats, have a cow-calf operation and a feedlot, and do custom fertilizer spreading. He serves on the Syngenta Executive Business Council and also on his church’s deacon board.

Strasser joined the board in 2017. He and his family raise corn, soybeans and wheat. He is the SDCGA’s representative to the U.S. Grains Council. He also operates Lockdown Labs dog kennel, which specializes in training and breeding Labrador retrievers.

Walsh, who joined the SDCUC board in 2016, farms in Union and Clay counties. He and his family grow corn and soybeans, and raise seed soybeans for several seed companies. They farm both dryland and irrigated ground, mostly near the Big Sioux River.

Minnaert also joined the board in 2018. He grows corn and soybeans and has a cow-calf operation with his dad, Kevin. After earning a degree in ag business from Lake Area Technical School in 2013, he returned to the family farm.

The Corn Growers Association, one of the largest commodity groups in the state, promotes corn, represents corn producers on public policy issues and serves as a legislative voice.

The Corn Utilization Council is responsible for the collection and administration of a one-cent-per-bushel corn check-off program. Money raised through that program funds research and development of new uses and markets for corn and corn byproducts that benefit South Dakota economically and environmentally.