Home / South Dakota / South Dakota 4-H’ers engage in second annual 4-H Legislative Session
A new user experience is coming! We'll be asking you to login to your Morning Ag Clips account March 1st to access these new features.
We can't wait to share them with you! Read more here. 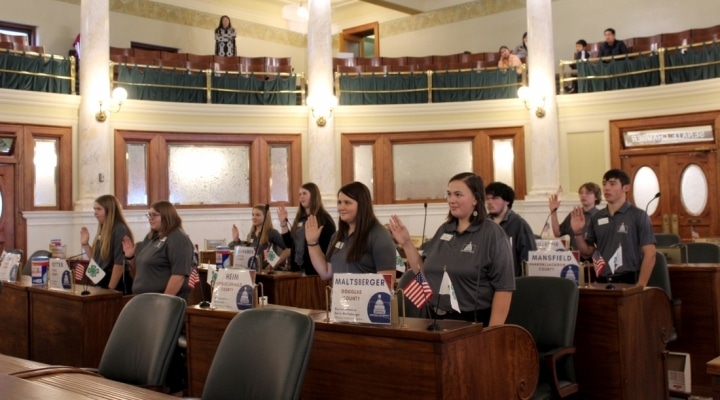 “Youth join the 4-H Legislature program because they hope to move South Dakota 4-H forward around a topic of interest. Sometimes they are successful, sometimes not, but what I really appreciate is the process itself,” says Tim Tanner, South Dakota 4-H Program Director. “It is truly an honor to watch as these youth gain advanced skills in collaborative research, civil discourse and critical thinking (sometimes on the fly!). Though only a few may go on to become civic leaders as adults, all participants gain workforce and life skills that add value to themselves and their communities.”

Launched in April, the seven-month program is designed to mirror the South Dakota legislature and engage young people in the process, from gathering petition signatures to be placed on a ballot and campaigning, all the way to carrying out a mock legislative session and passing bills. Since the nature of these governmental processes is complex with a multitude of steps, resources and necessary knowledge, webinars were broken down into more-focused topics that taught both the South Dakota legislative process and what was adapted for the 4-H Legislature.

Serving as their county’s representative, bills were written on 4-H-related topics with input from constituents and then debated at the session in October. In many cases, South Dakota 4-H Legislators had to learn about new project areas that their constituents had an interest in.

“The 4-H Legislature event was very fun. I enjoyed it, and I would recommend it to anyone,” says Tyrel Mansfield, who represented Haakon/Jackson Counties. “Some struggles I had were coming up with an idea for a bill and getting over the nervousness I had when presenting my bill. I learned a lot from this experience, and I am thinking about doing it again.”

In June, 4-H members across the state voted on the candidates they wanted to represent them during the inaugural 4-H Legislative Session. The following individuals were selected as 2021 South Dakota 4-H Representatives:

“Some personal takeaways were that I learned how to address the speakers correctly, and I learned how to run different things through the Legislature that I would have never known how to do. A challenge would be that it can sometimes be really hard to follow the correct procedure,” says Faulhaber, who represented Aurora County. “I would recommend other 4-H members participate, because it gives you a look of what an actual session looks like. If you know nothing about the legislature, this will teach you everything, so don’t be afraid to do it!”

“I appreciated the opportunity to be part of the 4-H Legislative session. I think civic education is essential to understanding the rights and responsibilities of being a citizen, and I believe that there is nothing like ‘hands-on’ experience in seeing how the legislative process works,” says Senator Duvall. “The students did a great job of coming up with potential legislation, presenting their ideas during floor debate and voting their convictions. I hope to see some of these students back in Pierre in the future, as a page, an intern or even an elected official.”

In addition to all the guest speakers and volunteers in this year’s program, South Dakota 4-H would also like to recognize the generous supporters of the 2021 event: Agtegra Cooperative and the South Dakota Farmers Union.

For more information on how to get youth involved in next year’s program, please contact your county 4-H office or the state 4-H office at sdsu.4h@sdstate.edu.