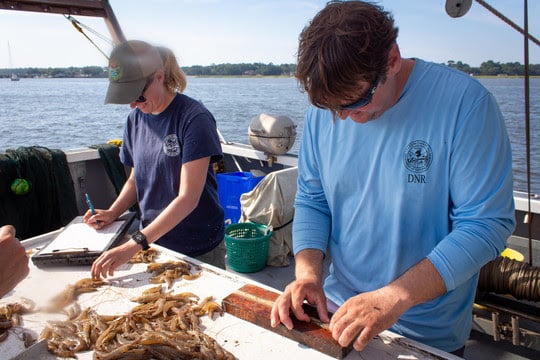 CHARLESTON COUNTY, S.C.  — The bright lights of shrimp trawlers have been visible against the offshore horizon each night this week, which can only mean one thing – shrimp season is about to open in full in South Carolina.

Commercial shrimp trawling will open in all legal South Carolina waters at 8 a.m. on Thursday, May 27, 2021. Georgia officials have not yet set an opening date for trawling season in their state waters.

“After a slightly cooler start to spring, things now look pretty normal for this time of year,” said Mel Bell, director of the South Carolina Department of Natural Resources’ (SCDNR) Office of Fisheries Management. “We’ve seen adequate evidence of coast-wide maturation and spawning of white shrimp. This is the same date we opened the season in full last year.”

Shrimping season in South Carolina typically starts in spring with the opening of a small subset of waters, called provisional areas, that allow shrimpers to take advantage of the harvest offshore while still protecting the majority of shrimp that have yet to spawn. South Carolina’s provisional areas opened on April 26 this year. The remainder of the harvest area, called the General Trawl Zone, is much larger and what will open in full on May 27.

“Given the relatively mild nature of this past winter and the promising results of several months of monitoring efforts conducted by our biologists, the abundance of overwintering white shrimp in our estuarine waters should set us up for good landings this season,” Bell said.

SCDNR officials set the opening date for shrimp season each year based on the conditions of the shrimp themselves. Aboard both commercial and agency vessels, biologists sample and study white shrimp frequently in late spring. One of the things they’re looking for is evidence that a majority of female white shrimp will have already spawned at least once before the season starts. Opening the season too soon – and allowing trawlers to catch females that have not had an opportunity to spawn – could reduce the size of the fall white shrimp crop, which are the offspring of the spring white shrimp.

South Carolina’s commercial shrimp calendar has historically had three peak periods. In the spring, shrimpers typically capitalize on the influx of roe white shrimp, large, early-season shrimp that generally fetch higher prices and generate the most value for fishing effort. The summer months are typically defined by a peak in brown shrimp, which are similar to white shrimp in size and taste. In the fall and into winter, shrimpers bring in a second crop of white shrimp; the offspring of the spring roe shrimp.

Because white shrimp are a short-lived species that are vulnerable to cold water temperatures and unusually wet or dry summers, their numbers can fluctuate dramatically from year to year. However, they’re also prolific spawners – which means that the populations can quickly rebound even after a poor year or season.