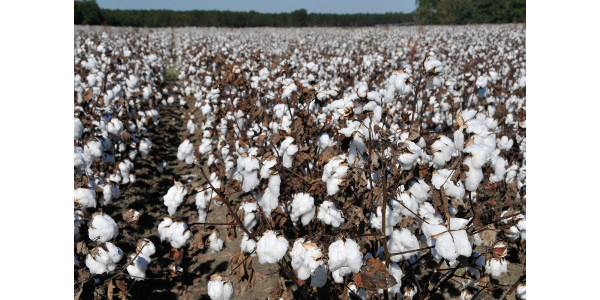 FLORENCE, S.C. — After rain damaged it in the last two years, this looks to be a bumper year for the South Carolina cotton crop, just as a Clemson University economist predicted before planting even began.

Mike Jones, South Carolina cotton specialist housed at the Clemson Pee Dee Research and Education Center, said 250,000 acres of cotton were planted in the state this year, up from 190,000 last year. Jones said this year’s crop could produce record yields if the weather holds out.

“Right now, we’re predicting 960 pounds per acre,” said Jones during the Clemson Pee Dee REC Field Day. “I’ve been driving around and talking with (Clemson) county agents in the cotton-growing counties. I haven’t seen nor heard of a bad crop in the state this year.”

Jones credits this year’s bumper crop to the weather.

During the South Carolina Cotton Growers’ annual meeting in January, Nathan Smith, an Extension professor and economist at the Clemson Sandhill Research and Education Center, predicted the South Carolina cotton crop would increase this year.

About 80 percent of the South Carolina cotton crop is planted the first week in May. Cotton harvest begins in late September. A report from the United States Department of Agriculture’s Agricultural Marketing Service shows 63 percent of cotton bolls opened as of Sept. 18. Some South Carolina fields have already been picked and filled with modules to be taken to gin yards. Harvesting and ginning are expected to be in full force in the next two weeks.