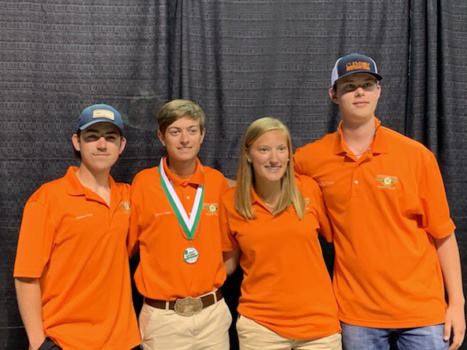 GRAND ISLAND, Neb. — Cameron Huston of Edgefield County nabbed the first High Over All score ever for a South Carolinian at the 2019 4-H Shooting Sports National Championships with a near-perfect 99/100 score to take first place in the Shotgun Trap Individual competition.

Huston, a recent graduate of Strom Thurmond High School, picked up shooting when he started high school and heard about the competition from a friend who had taken part and shared how much fun it was with him.

“I said I would give it a try and go and I’m so glad that I did because I met some good people, had a lot of fun and it was just an overall good experience,” Huston said. “My grandparents took me out there (to Nebraska) over the summer one year and that’s the place to live for me. I just really enjoyed it. It’s just the flat openness and you can see for miles in every direction.”

To qualify, shooters must fill out an application that shows their involvement in the community, leadership, grades, as well as shooting scores, making it an “extreme honor” to be chosen for the team, according to South Carolina 4-H Shooting Sports coordinator Richard Willey.

“Every year four new shooters are chosen, so no one can go more than once,” Willey said. “This allows other shooters to experience this wonderful opportunity. All four members of this year’s team members have represented South Carolina very well both on and off the shotgun fields, and all four of them kept a positive attitude and worked hard for every target. Their sportsmanship, manners, fellowship and teamwork have been outstanding.”

On day one, the South Carolina team competed in sporting clays, with Kelly faring the best among the Sandlappers as he just missed the podium by a single target on a challenging course, Willey said.

The team continued to perform during skeet shooting on day two and finished in seventh place, missing the podium by only three targets. Huston posted the highest individual score of the four but missed the podium by two targets before following it up with his 99/100 score in Shotgun Trap on day three to garner top honors in that competition.

Huston said he was pleased with his performance, but reaching the 99/100 mark didn’t enter his mind during the competition.

“I’d kind of heard about it, but it didn’t really process for me that I was the first (South Carolinian to win first place in the Shotgun Trap competition,)” he said.

“We are very proud of these young people and especially happy for Cameron for winning the first High Over All in this competition that South Carolina has ever won,” said S.C. 4-H assistant state director Ashley Burns. “It is always gratifying for those of us who work with 4-H youth to see these young people taking on a learn-by-doing approach, overcoming the obstacles and challenges in their way, having success on their own terms and realizing it was their own dedication and work that drove them to that positive outcome. That’s the heart of the 4-H mission.”

South Carolina 4-H Shooting Sports is one of several project areas offered in the area of natural resources to the state’s young people. The major disciplines offered include archery, BB gun, hunting, muzzle loading, pistol, rifle and shotgun. The program is flexible and adaptable to nearly any audience — rural or urban — and allows youth to learn marksmanship, the safe and responsible use of firearms, career exploration and more.

FREE webinar series: the business of food and farming