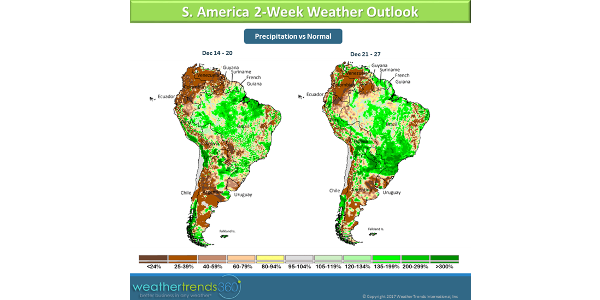 Like southern Brazil, drier conditions as of late are also starting to raise concern for farmers in Paraguay and Uruguay.

Soybean and full-season corn planting is nearing completion in Brazil. Soybeans are about 96% planted, with only some parts of southern and northeastern Brazil still planting. Full-season, or first crop, corn is about 95% planted, ahead of the 5-year average of 86%. Some recent dry conditions in southern Brazil and states like Rio Grande do Sul are beginning to raise concern. While southern Brazil could see some rain over the next 2 weeks, precipitation will be spotty and not cover entire states. Southern Rio Grande do Sul is currently forecast to miss out on much of the rain over the next two weeks, and continue to trend drier to much drier than normal. This recent drying trend does not come as much of a surprise as a weak La Nina recently re-emerged. Similar to last year, waters in the equatorial Pacific Ocean have fallen consistently below -0.5C. Coupled with the necessary atmospheric changes, a weak La Nina was declared and is expected to persist through Northern Hemisphere winter (Southern Hemisphere summer). Current long-range outlooks show the potential for some favorable rains in southern Brazil in January, but dry conditions return in February and March. Should the rains materialize in January, crops in southern Brazil could still see favorable yields. However, should January take a turn for the drier, the crops could face some challenges. Luckily, conditions in Central Brazil and states like main-producer Mato Grosso, are still projected to have mostly favorable conditions through the rest of the soybean season. The return of rains in November helped boost not only planting progress, but plant conditions. Central Brazil soybean production could help offset any potential future troubles in Southern Brazil. The current estimate for Brazil’s total soybean production from Conab stands at 109.1 million tons. This is up from last month by 1.6 million tons. Despite this increase, if realized, this still represents a decline from last year’s production by about 4.9 million tons.

Like southern Brazil, drier conditions as of late are also starting to raise concern for farmers in Paraguay and Uruguay. In Paraguay, a majority of their soybean crop is grown in the southeastern portion of the country which borders northern Argentina and southern Brazil. While planting in the country has been complete for several weeks now, the recent drying trend hit as some of the crops were beginning to fill pods. Some fields of the earliest planted soybeans have already been harvested and yields were low and disappointing. In Uruguay, soybeans are planted in the northern part of the country, close to the Brazilian state of Rio Grande do Sul, and in the western part. Dryness for some has halted soybean planting as farmers wait for moisture. However, crop that was in ground by mid-November germinated just fine. While the remainder of December could bring some much-needed rainfall to Paraguay’s soybean region, drier than normal conditions are expected across Uruguay. Currently long-range outlook for January shows the potential for some improved moisture in Uruguay, but near to even below normal rains in Paraguay. Similar to southern Brazil, the drier trends are expected to return by February and into March.