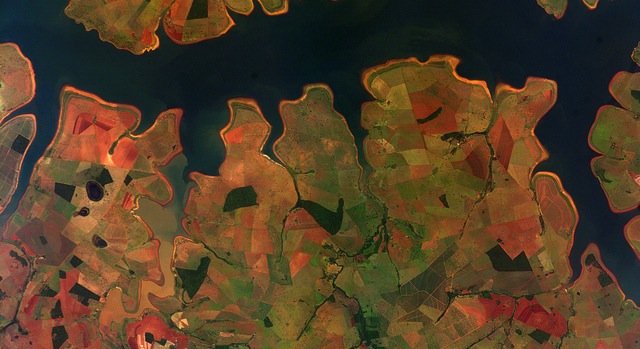 For much of the season in Brazil, the weather has been nearly ideal and yields are expected to once again be near or exceed the current record. (NASA Goddard Space Flight Center, Flickr/Creative Commons)

WASHINGTON — In Brazil, soybean harvest continues while safrinha corn planting is essentially complete. Around 65% of the country’s soybean crop has been harvested thus far, advancing about 7% from the previous week. Overall progress is about 3% ahead of the 5-year average pace, yet 3% behind last year. While main producers such as Mato Grosso in central Brazil are about complete with their harvest, other parts of the country begin harvest later and are just getting into their main harvest timeframes. One of these locations is the most southern state of Rio Grande do Sul. While much of the southern part of the state has trended drier than normal the past few months, a majority of the state’s crop is grown further north where rains have been more frequent. Rio Grande do Sul’s soybeans are nearly 13% harvested while a majority of the crop still needs to reach maturity. Yields thus far in the state have been better than expected and recent rains even in the southern part of the state are expected to provide some help to the crop, especially the later maturing beans. Over the next seven days, northern Rio Grande do Sul is forecast to receive above normal rainfall which will aid the crop. In the 8-14 day forecast period, conditions could take a turn for the drier which will be a plus for harvest efforts across southern Brazil. The other part of the country that has a later soybean harvest is the northeastern region. For much of the season, the weather has been nearly ideal and yields are expected to once again be near or exceed the current record. While the next seven days should be somewhat favorable for harvest in this part of the country, especially in western Bahia, a somewhat wetter than normal trend is currently forecast through much of April. While the forecast doesn’t look excessively wet, there could still be a few delays with harvest. 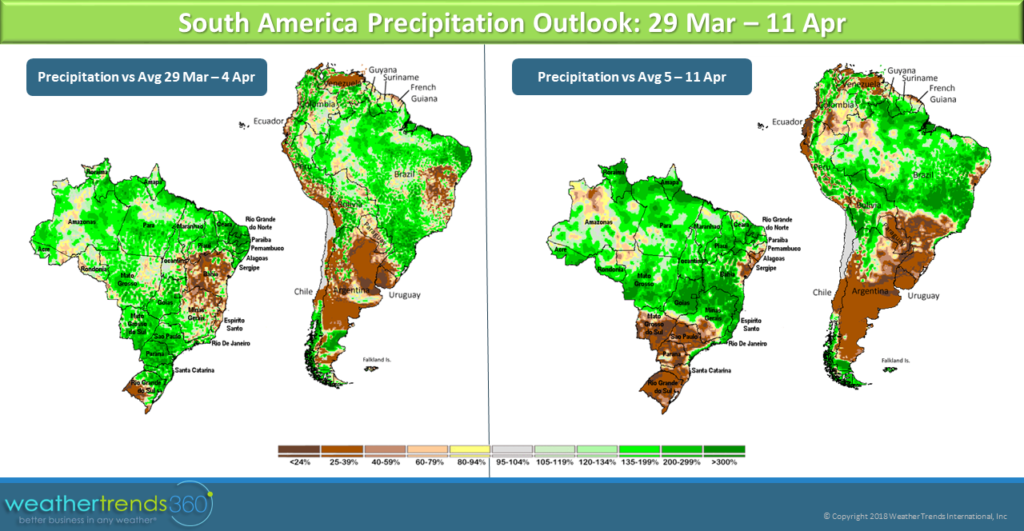 While weather during much of the season, and yields so far have been generally favorable for Brazil, Argentina’s soybeans have suffered a much different fate. Minimal rainfall and ever deepening drought conditions have plagued Argentina’s soybean region for much of the season. Since the beginning of 2018, rainfall in the region has trended significantly below normal and the 2nd driest in 27+ years. Precipitation amounts haven’t been this low since 2004. Overall, the soybean crop is rated to be about 80% poor to very poor, with the later planted varieties rating even worse. Any rains that have occurred in the region are generally extremely localized and in minimal amounts. Over the next seven days, some parts of central Argentina could receive a shower or two, but it won’t be enough to replenish soil moistures. After this, rainfall is once again forecast to be minimal with the best chance of rain occurring in the northern part of the country. Early yields so far are highly variable, but still disappointing. Only about 18% of the country’s crop has reached maturity so better yield estimates will not be known for several more weeks. Total production for Argentina is now projected to only reach 39.5 million tons.

Heading back to Brazil, safrinha corn planting is basically complete. In main-producer Mato Gross, the entire safrinha corn crop has been planted – nearly 11 million acres this year. The earliest planted fields in the state will start to enter pollination in the next week or so. Overall, the crop is said to be in generally good condition.  Despite this, total production is still anticipated to be less than last year’s record-breaking crop. Acreage is estimated to be down over 5% this season, and with a slight delay to planting, lower yields are also expected. The current estimate for Mato Grosso’s production is 25.9 million tons. If realized, this would be a nearly 15% decrease from last year. The remainder of the month looks generally favorable for the corn crop in the state. Looking ahead to April, temperatures are forecast to be mostly favorable. However, toward the end of the month and into early May, there could be several very hot days for this centrally-located state. In states further south, like Parana and even southern Mato Grosso do Sul, temperatures through April in Parana are forecast to be generally favorable. However, later planted, thus later maturing crops could be impacted by some colder trends in late May. An early frost cannot be ruled out for the state.

Plenty of moisture in all the wrong places