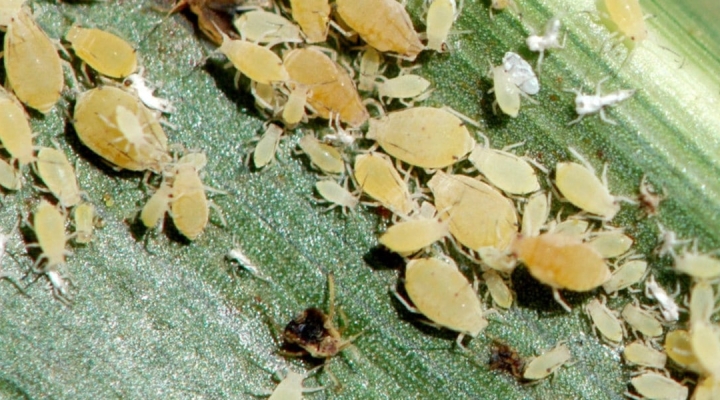 Grain sorghum in South Texas is at or nearing harvest and avoided yield damages by sugarcane aphids. But much of the state’s grain and forage acres remain in areas that have not yet experienced threshold numbers of the damaging pest.

Sugarcane aphids in Texas originally emerged in fields around Beaumont in 2013 and devastated sorghum fields. The pests reached the Texas Plains by 2015, where they caused widespread damage.

Producers in the Rio Grande Valley alone lost $31 million to the pest in 2015, according to an AgriLife Extension study. The same study showed producers avoided an additional $35 million in losses to sugarcane aphids by utilizing recommended scouting and spraying regimens once the pest reached certain numbers.

Since 2015, the negative impacts of the sugarcane aphid on Texas’ sorghum production have waned due to hypervigilant producers, the introduction of aphid tolerant sorghum varieties and higher numbers of beneficial insects that predate the pest.

Sekula said similar aphid activity occurred in her variety trials. But most fields in South Texas, at least those that received decent moisture from storm systems in April, looked very good and with no aphid populations of concern.

“Lingering populations may rebuild in later-planted fields or replants, but everything that is ready for harvest should be fine,” she said. “They may peak multiple times through November, and producers are aware of that and typically monitor and act when aphids near threshold.”

Crumley continues to see populations of sugarcane aphids in fields and in volunteer Johnson grass, but in no higher numbers than usual so far.

“Producers are having no trouble controlling them,” she said. “The complaints this season were related to the increased input costs related to applications.”

But nature has also done its part over the years, Reed said. Beneficial insects that prey on sugarcane aphids have adjusted to the cyclical rise and fall of infestations.

Sugarcane aphid numbers typically build in the Texas Plains in July and August as sorghum fields reach the boot stage, he said. Beneficial insects and tolerant varieties have been keeping numbers in check for the most part so far.

Reed said last year around 80% of sorghum acres in his region were treated with pesticides to protect the crop from the pest. It was the first time less than 100% of acres were sprayed since sugarcane aphids became a problem.

“Beneficials have really adapted and learned to jump on them,” he said. “It feels like emerging pests can run rampant for two to three years before nature tries to restore a balance. So, beneficials coupled with hybrid sorghum varieties have really made a difference.”