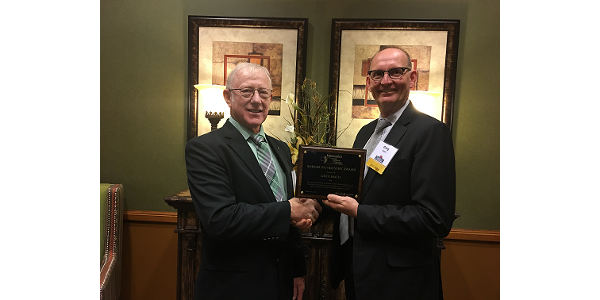 LINCOLN — The Nebraska Grain Sorghum Producers Association’s annual appreciation banquet was the setting for the presentation of annual service awards and recognition of yield contest winners by the NeGSPA and the Nebraska Grain Sorghum Board. The awards are presented annually to recognize an individual or organization for contributions to the development, promotion and advancement of the sorghum industry.

“Greg was an easy selection for this year’s award,” stated Lynn Belitz, Fullerton, NeGSPA President, “As the Director of Agriculture, he was always accessible, understanding, and quick to respond when issues surfaced.”  In his new position as Undersecretary, he remains mindful and responsive to the needs of farmers and ranchers across the country.

The Service Award presented by the Nebraska Grain Sorghum Board was given to Tyler Harris, Editor of the Nebraska Farmer Magazine. Tyler covers news and production issues of interest to growers across the Great Plains.  He is certainly a familiar face to farmers in Nebraska and a valuable and respected industry partner.

“Tyler has a thirst for knowledge that drives him to ask the important questions to get the story right,” stated Mike Baker, Trenton, Nebraska Sorghum Board Chairman.  “We value his support, involvement and knowledge in working with the Board to help share the sorghum story and to educate farmers and the public about the crop, its virtues and economic value to Nebraska.”

Annually the National Sorghum Producers highlights the success of sorghum producers from across the country in their yield contest. Winners were officially recognized at the Commodity Classic in Anaheim, CA in February.  Nebraska GSPA also recognizes the winners from Nebraska at their banquet.  Receiving certificates of accomplishment were the following: