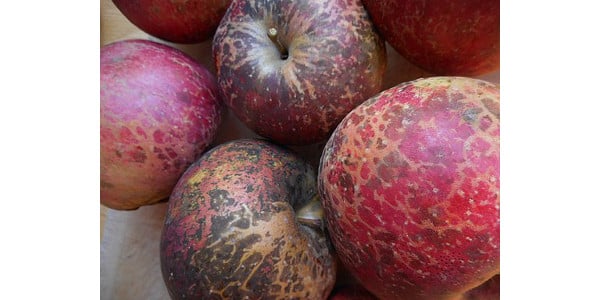 COLUMBIA, Mo. — In the fall, homeowners who are worried about the apples from their orchards often contact me. Their apples had black, sooty-looking blotches all over. The blackened material was just superficial and did not penetrate the skin. It seemed to rub off with a bit of scrubbing. Were these safe to eat?

What these homeowners were dealing with is a fungal disease, commonly known as sooty blotch. A related disease is flyspeck. In the past, these were considered separate diseases. They are caused by a complex of several organisms. Some researchers now hold that they are different forms of the same disease.

The causal fungi overwinter on the twigs of apple trees and other woody host species. Spores are carried by raindrop splashing and wind to the fruit. Humid, rainy weather aids the spread of this disease. Optimal temperatures for fungal growth occur at 59–75 degrees F. Hot, dry weather does not favor the development of sooty blotch or flyspeck.

Fungicides may be used to control this disease. For control recommendations, please refer to our guide sheet, “Fruit Spray Schedules for the Homeowner.”

Many of the people contacting me asked if the fruit could be eaten. Since this is a superficial disease, and can be washed off, yes, it can be eaten after cleaning the fruit. Be careful to note that if something else has aided the penetration of the skin, the fruit may be rotted and should be discarded.

Although they can be eaten, apples that have been infected with sooty blotch or flyspeck may not keep well. That is because the fungus dissolves some of the protective wax. This wax naturally occurs on the apple and prevents dehydration. Thus, the apples may shrivel and not keep well.