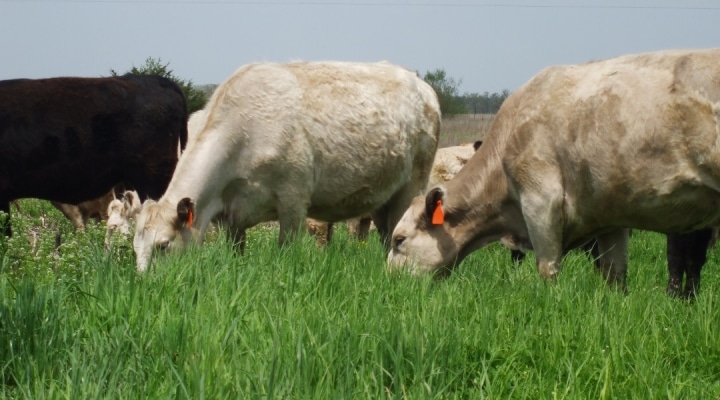 The U.S. cattle herd appears to continue its second consecutive year of decline within its typically decade-long period of expansion and contraction, according to Jason Franken, agricultural economist at Western Illinois University and contributor to the University of Illinois farmdoc team. (GO SEED Photo)

URBANA, Ill. — The U.S. cattle herd appears to continue its second consecutive year of decline within its typically decade-long period of expansion and contraction, according to Jason Franken, agricultural economist at Western Illinois University and contributor to the University of Illinois farmdoc team.

“Currently, there are about 5.5% more beef cows in the U.S. than during the last low point in 2014. The first signs that the beef herd was leveling off came about a year and half ago, and recent reports indicate continuation of that trend, reflecting economics and drought in parts of cattle country,” Franken says.

The USDA’s Cattle Inventory report has the total number of cattle and calves on July 1 at 101 million head or 1.3% under last July’s inventory of 102 million head, compared to the average pre-report estimate of 0.5% lower, and also below the anticipated range. Most of the report’s numbers on beef cattle fall near the bottom end of pre-report estimates. All cows and heifers that have calved total 40.9 million head, also 1% below last July, which is driven by 2% fewer beef cows at 31.4 million head, as milk cows at 9.5 million head are 1.6% higher than last July.

Beef replacement heifers, at 4.3 million head, are down about 2% from a year ago, compared to average expectations of 1% lower, while milk replacement heifers, at 4.1 million head, are 2.5% higher. The category of other heifers weighing over 500 pounds is down 2.6%. For the same weight category, steers are 1.4% lower and bulls are even with last July.

“The number of calves under 500 pounds, at 27.4 million head, is also down 1.4%. That’s still 2 million more than when the cattle herd was around its last low point in July 2014, so a return to similar feeder cattle prices in excess of $2 per pound seems unlikely at this time,” Franken states. “The 2021 calf crop, estimated at 35.1 million head, is down slightly from last year, which may help hold down the number of animals on feed and beef production for the remainder of 2021 and into 2022.”

The USDA’s July Cattle on Feed report indicates 11.4 million head on feed or just 1.3% less than July 2020, consistent with expectations of a bit more than 1% lower. In June, feedlots placed 7% fewer cattle than a year ago and marketed 3% more animals. Each of those numbers was within the expected ranges but somewhat off from the ranges’ midpoints (5.8% lower and 2.3% higher, respectively), Franken notes.

“The slightly lower number of cattle on feed reflects 2% fewer heifers and 0.8% fewer steers than a year ago. Even so, heifers still comprise over 38% of the cattle currently in feedlots, as compared to only 31%-33% during much of the last expansion. This is again evidence that the breeding herd is leveling off or at least not expanding overall,” he says.

Given the inventory and cattle-on-feed numbers, beef production is anticipated to be no more than 1% higher in 2021 than last year and then drop 1.4% next year, Franken explains. Recent slaughter numbers indicate lighter weight cattle and hogs on average, and cold storage reports continue to show lower than normal frozen stocks of red meat. In terms of domestic demand, per capita beef consumption is expected to remain at about 58 pounds per person in 2021 and drop to 56.6 pounds per person in 2022. After taking a hit last year from intermittent packer closures due to COVID-19 cases among employees, exports are expected to rebound this year up to 16% higher, and then decline from that level by about 3% in 2022, Franken states.

“A number of factors could yield notably different prices, including the extent to which drought continues to spur further liquidation of the cattle herd and resulting in subsequently higher prices and the possibility that another strain of the coronavirus arises, thereby constraining demand and lowering prices,” Franken concludes.

Discussion and graphs associated with this article available here: https://www.youtube.com/watch?v=XI418YUAST4 or here: https://uofi.box.com/s/b1apql2nfj7ado51ilf8rh6uzhbt423j