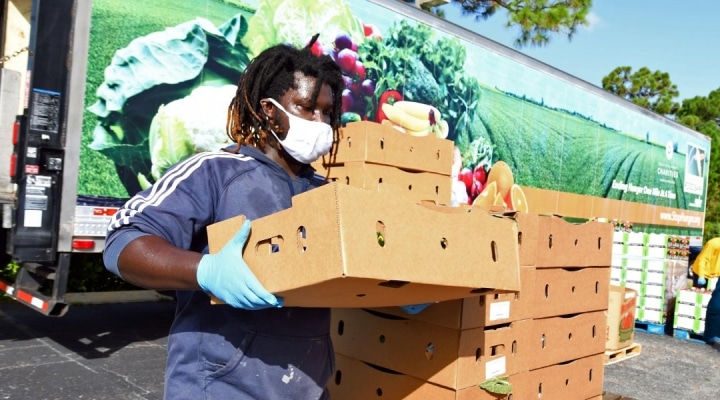 URBANA, Ill. ­­– Food insecurity in America is reaching an all-time high during the COVID-19 pandemic. But large regional differences exist in the severity of the impact.

Experts project over 50 million Americans will be food insecure in 2020, including about 17 million children, says Craig Gundersen, ACES distinguished professor in the Department of Agricultural and Consumer Economics at the University of Illinois.

Gundersen estimated food insecurity using Map the Meal Gap, an interactive model he developed for Feeding America, a nationwide network of more than 200 food banks in the U.S. For the current report, he combined MMG data with projected unemployment numbers.

“One of the key things about COVID-19 is how there’s differential impacts across the country and by demographic groups. People with college education generally have not seen much of an impact on either unemployment rates or incomes. However, people in lower-wage jobs tend to be impacted a lot more,” Gundersen states. “We would expect greater impact of COVID-19 in areas with a high concentration of service industry jobs.”

The report finds the hardest hit states are the same as before the pandemic – Mississippi, Arkansas, Alabama, Louisiana, and New Mexico ­- but with higher rates. Jefferson County, Mississippi, has the highest food insecurity rate, 30.4%, in the country.

However, the pandemic disproportionately affected other states. For example, Nevada jumped from 20th to eighth highest food insecurity rate by state.

“Areas like Nevada, which has a strong emphasis on the service industry and tourism, will have substantially higher rates of increase in food insecurity than areas with fewer service sector workers,” Gundersen says.

These findings can help direct relief efforts, he notes.

“Resources should continue to be directed towards those areas with greater needs before, during, and after COVID-19. But we also have to recognize that during the pandemic situation there are areas of the country, such as Nevada, which may need more emergency assistance in the near term,” Gundersen says.

“Furthermore, some of these jobs may not come back; tourism may be permanently down in the United States. So these impacts could also have longer term ramifications,” he concludes.

Healthcare insurance is complicated, but can be a great business decision