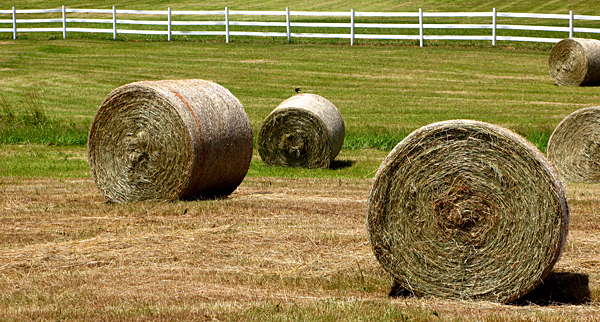 Unseasonably cool temperatures in late March and April have delayed the development of pasture grasses and legumes — which are grazed by livestock — by as much as two weeks. (Wikimedia Commons)

“When spring temperatures are too low to generate much forage growth in the pasture then more hay needs to be fed,” said Keith Johnson, Purdue Extension forage specialist. “If pasture growth doesn’t get started soon, some producers are going to start running out of hay.”

Unseasonably cool temperatures in late March and April have delayed the development of pasture grasses and legumes — which are grazed by livestock — by as much as two weeks, Johnson noted.

“It is early spring and producers are tired of feeding hay to their animals. There have been reports of livestock producers running out of hay to feed. It is tempting to turn out on pasture even though the amount of growth is low yielding,” Johnson said. “It is not in the best interest of the forage to graze too early as it can set back plant growth for the entire season. The soil has also been wet and hoof action while grazing could do even more damage.”

Purchasing hay from a reliable source is typically the easiest option, but could be expensive at this time of year, Lemenager said, especially when stored forage supplies are limited. Johnson recommended that producers carefully inspect purchased hay for signs of invasive plant material before putting it out in their fields.

“It could create a long-term weed problem you’ll be dealing with for years,” he said.

Lemenager said purchasing hay by the ton is typically the best deal for producers based on a nutrient analysis. Producers also need to factor in cost of transportation when purchasing hay.

Limiting hay feeding access time and supplementing the animals’ diet with high-fiber feed such as pelleted soybean hulls, or a pelleted soybean hull-corn gluten combination, is another solution. Purdue studies have shown that reducing access time to eight hours a day could reduce hay inventory disappearance, in the form of hay wastage, by 17 to 18 percent, while still providing all the dry matter intake for a 24 hour period.

Reducing herd size is another option for producers who need to stretch their hay supplies.

“You can consider culling low-performing or unproductive animals,” Lemenager said. “As the grass begins to green-up each spring, there is usually a good market for cow-calf pairs.”

Johnson and Lemenager have produced a video addressing questions producers might have about the hay supply and pasture conditions. The video is available at https://vimeo.com/264794213.

For more information, contact Johnson, Lemenager or your county Purdue Extension Educator. A list of Extension offices statewide is available at https://extension.purdue.edu/Pages/countyoffices.aspx.

This Little Piggy goes to Market at This Old Farm