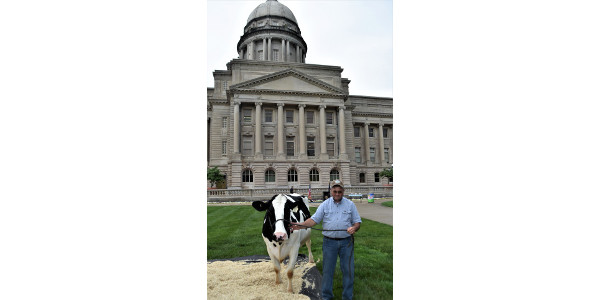 Greg Goode of Casey County brought one of his cows to the Capitol lawn for the June Dairy Month proclamation signing. (Courtesy of Farmstead Media)

(A version of this article appears in the June 7, 2018 edition of The Farmer’s Pride)

FRANKFORT, Ky. — After a morning of intermittent thunderstorms, dark clouds still scudded up and down the Kentucky River as preparations were being made on the state capitol lawn for the proclaiming of June Dairy Month in Kentucky. The uncertainty of the day’s weather seemed to mirror the mood of the Commonwealth’s dairy industry, as some 19 of the state’s nearly 600 dairy farm families faced the loss of their milk contracts, and for most, their lifestyle and livelihood.

In February, Dean’s Milk notified it’s Kentucky contractors, and many in other states, of the cancellation of their contracts as of the end of April. Dean’s has subsequently extended the contracts through June, but for many farmers the extension was too little, too late.

The day the extension letter came, Henry County dairyman David Taylor had just shipped several of his cows to a buyer from Indiana and was waiting on a truck to pick up another load. “It just gives us more time to get the cows moved,” Taylor said of the extension.

It was impossible to ignore the weariness and deep sadness in Taylor’s voice as he said he had hoped other companies might be willing to pick up the contracts, but no one came through. Now, it’s too late.

A third-generation dairyman, Taylor has been in the business 41 years. He had hoped his two sons, Brad and Matt, would continue in the business. They’ve now taken off-farm jobs as the family considers their options for the future.

Taylor says he’s looking into the possibility of raising replacement heifers for larger dairies. Beef cattle and feeder calves are also under consideration, as Taylor examines the current layout and infrastructure of his operation and how it might be most effectively utilized.

“We didn’t create this problem and we can’t fix it. We just have to deal with it,” observes Brad Taylor.

This isn’t the first time the Taylor’s have been forced to make a mid-course correction. Three years ago, the family also raised 20 to 30 thousand pounds of tobacco on contract. That contract was terminated as well.

Despite the clouds, the distant roll of thunder off to the south, and the threat of rain, the sun briefly shone bright on the Kentucky capitol as agriculture commissioner Ryan Quarles introduced governor Matt Bevin. Bevin tried to maintain the celebratory feel of the occasion, but he did not try to ignore the problems at hand.

“It’s not easy at this time, and I understand it,” said the former 4-H and FFA member who spent some of his formative years milking cows. “We are trying to find a solution to what is affecting so many of you in the dairy industry.”

“We were hoping we would have something to be able to announce to you today, but we don’t, which is heartbreaking” the Governor continued. “That isn’t to say that there won’t be, we just don’t have it yet. We’re turning over every stone to try and find an outlet for the product that you produce.”

Bevin indicated that commissioner Quarles and Governor’s Office of Agriculture Policy executive director Warren Beeler, along with Maury Cox of the Kentucky Dairy Development Council, are diligently working to find some answers, but the complexity of the current dairy industry structure makes it difficult.

“Some of it is far beyond our control, but that doesn’t mean that we shouldn’t be looking for some avenue through which those farmers who are still producing milk in this state can find a market at a price that justifies their continuation,” Governor Bevin said.

“It’s an amazing industry,” Beeler observed. “I have a soft spot for it because I was raised in it.”

Like the dark clouds over the Kentucky River, rumors about the future of the dairy industry continue to swirl. “There’s too many rumors floating around to know what to believe,” David Taylor admitted.