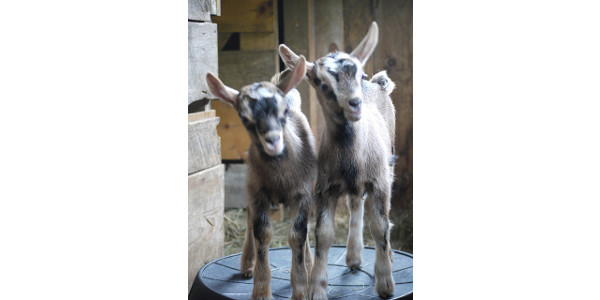 COLUMBIA CITY, Ind. — Lately I’ve heard from local farmers who are birthing babies – farm animal babies. As I grew up on our home farm it seemed like some of our farm animals tended to pick the worst winter weather to go into labor, and we’ve had our share of that this year. If you’re not familiar with farm animals, you may be surprised at the unusual names of some farm animal babies! Here are a few of our most commonly raised farm animals and what their offspring are called.

Let’s start with goats. Baby goats are called kids. Young females are called doelings, while young males are called bucklings. Birthing is called kidding. For those of us with any connection to agriculture, this knowledge is why we call our human offspring “children” rather than “kids.” It may also cause some to need clarity with the phrase, “Are you kidding?”

In terms of sheep, a baby sheep of either sex is called a lamb. A ewe lamb is a female, and a ram lamb is a male. Birthing is called lambing.

Farrowing is the term used for a sow giving birth to a litter of piglets, and raising the young pigs to weaning age. A gilt is a young female, and boars are males, although we typically think of boars as adult breeding males. Of course, it’s best not to confuse the term “gilt” with the human notion of making a mistake and feeling “guilt.”

A young bovine animal of either sex of the beef or dairy variety is called a calf. A young female is called a heifer, and a young male is called a bull. Birthing is called calving. The lower leg muscle we all have is a calf. Why it is so named, I do not know. It looks nothing like the animal.

Rabbits also have unusual terms. The birth process in rabbits is called kindling. To give birth is to kindle. All newborn baby rabbits are called kits. A male is a buck, and a female is a doe. When most people think of kindling, they are searching for small twigs in which to start a campfire. And, for those interested in e-books, one possible device you may choose is a Kindle. When we purchase a do-it-yourself project with many parts, we’re probably purchasing a kit.

It’s probably a coincidence in most cases, but I find it interesting how many animal terms have been, or somehow find their way into our common vernacular.

Register for the Pork Management Conference