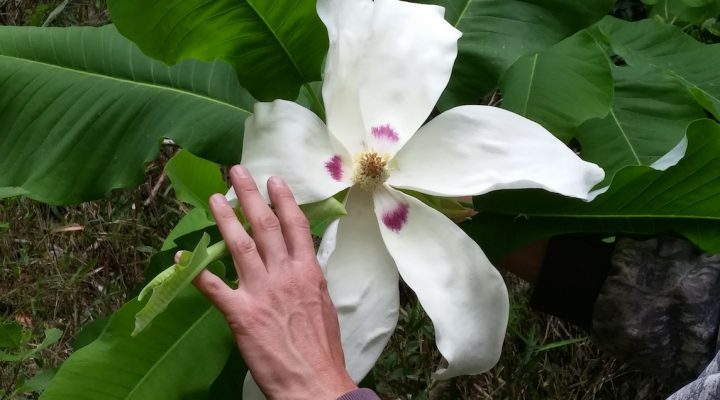 An Ashe magnolia blossom. The tree’s large flowers and leaves make it attractive to gardeners and landscapers. (Photo by Gary Knox)

GAINESVILLE, Fla. — An endangered species of magnolia that only grows in the Florida Panhandle has been named the 2017 plant of the year by the Garden Club of America.

The timing couldn’t be better, says Gary Knox, professor of environmental horticulture with the University of Florida Institute of Food and Agricultural Sciences.

For the last three years, Knox and a team of researchers at the UF/IFAS North Florida Research and Education Center in Quincy, Florida, have been studying the Ashe magnolia to try to figure out why it’s so rare and how it may be conserved.

Ashe magnolias are grown commercially as landscaping plants, and their large flowers and leaves make them popular among gardeners. The white and purple blossoms are the size of dinner plates, and the leaves grow up to two feet long. “This is what we call a ‘charismatic’ plant,” Knox said.

Knox hopes the Garden Club of America’s declaration will help spread awareness about the plight of Ashe magnolias in the wild. According to the Garden Club of America’s web site, “the award is given to an outstanding native plant which is underutilized but possesses superior ornamental and ecological attributes. The goal is to encourage the propagation and planting of these plants in our gardens and the landscape.”

The UF/IFAS research team is in its third year of collecting data on Ashe magnolias growing in the Torreya State Park and on land managed by The Nature Conservancy in Liberty County, Florida. Researchers, students and volunteers record each tree’s location and characteristics, such as the number of flowers it has.

While the team discovered more adult trees than expected, they found fewer seedlings than hoped. This is a sign that something is interrupting the trees’ ability to reproduce, said UF/IFAS biologist Barron Riddle, who leads the project’s field research.

“Without pollination, you can’t have viable seeds,” Riddle said. “This study really emerged as a pollinator study because we first wanted to know which insects were pollinating Ashe magnolias.”

According to the scientific literature, beetles are the primary pollinators of magnolias. However, the UF/IFAS team has found both beetles and bees in pollinator traps created for the study. These traps resemble Ashe magnolia flowers but are made of plastic and covered with a sticky substance that snares would-be pollinators.

The contents of each trap provides clues about which pollinators affect reproduction. “So far we are only seeing seedlings develop under trees where we have captured bees, indicating that bees may play a role in reproduction,” Riddle said.

However, pollinators are just one piece of a larger puzzle. The UF/IFAS research team is also investigating how factors such as pests, disease and wildlife behavior impact Ashe magnolia survival.

“This holistic approach requires an interdisciplinary team with expertise in wildlife ecology, entomology, plant pathology and environmental horticulture,” Knox said. Faculty at UF/IFAS North Florida Research and Education Center come from all different scientific backgrounds and make it possible to view a problem from many angles, he said.

The Quincy facility is also home to a magnolia garden that is part of the National Collection of Magnolia and boasts more than 200 magnolia trees representing dozens of varieties and species, including Ashe magnolia. Ashe magnolias flower in April.