Home » Solving a million dollar problem for the aquaculture industry 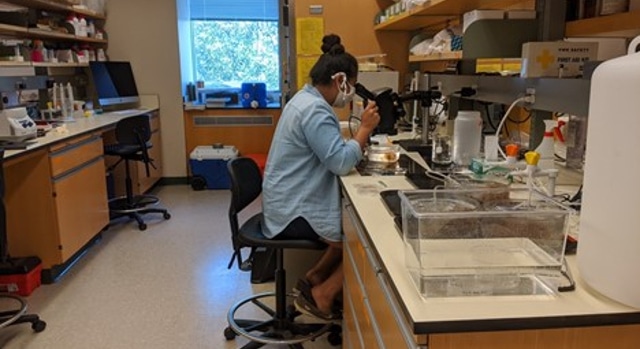 The research is vital to NH’s oyster-dominated aquaculture industry, in which the number of farms grew faster than any other state—a 229 percent increase— from 2013 to 2018, according to the U.S. Census of Aquaculture.

New Hampshire had nearly $1 million in sales from aquaculture in 2018. Globally, more than 50 percent of all human-consumed seafood is produced by aquaculture—the farming of fish, mollusks, aquatic plants, and other products. The global economic impact of aquaculture is greater than $31 billion. When post-harvest operations data are included, it is estimated that one in two workers in the sector is a woman.

“In order to get happy and healthy farmed seafood, we need the nets and equipment to function properly. The problem is that Ectopleura crocea are clogging up these nets and structures, which reduces the waterflow to farmed seafood. This robs the seafood of vital nutrients, which can negatively impact the growth and quality of seafood,” said Sydney Birch, a doctoral student molecular and evolutionary systems biology whose research is being funded by the NH Agricultural Experiment Station.

Ectopleura crocea is a relative of jellyfish and are considered a fouling organism, which means that they aggregate on man-made structures, similar to barnacles. Ectopleura larvae use a combination of light, taste, and touch information to choose when and where to metamorphose into adults that create the problems. The aquaculture industry estimates that the cost of managing and removing Ectopleura accounts for as much as 10 percent of the total production cost of farmed seafood.

“The economic impact to aquaculture of fouling marine species is significant. In Great Bay and in Newcastle shellfish fisheries, workers expend much effort removing fouling organisms from culture systems annually. Often, this procedure must be done intermittently throughout the growing season at significant cost,” said station scientist David Plachetzki, associate professor of molecular, cellular, and biomedical sciences in the UNH College of Life Sciences and Agriculture.

Birch combined both genetics and behavioral experiments that tested the effects of different colors of light, chemicals involved in taste, and different surface textures to pinpoint what sensory pathways the larvae are using to identify a good habitat. She found that larvae were least likely to call aquaculture production systems home when there was a surface texture and no biofilm. And it turns out, larvae don’t like red light.

Scientists believe the larvae are exhibiting a phenomenon called Multisensory Integration (MSI), which is occurs when an animal incorporates information from more than one sense and behaves differently as a result. The process has been highly researched in animals with brains, but less research has been done on animals that lack brains like these larvae.

“These results support the behavioral results that we found from the larval settlement study that larva can decipher and respond to all three cues. This is pretty fascinating since these larvae do not have brains to process all of this information,” Birch said. “We think that this could be one of the first examples of a brainless larvae using MSI during the larval settlement decision.”

“Ultimately this research will be used to prevent Ectopleura larvae from choosing aquaculture nets and structures to live on. This could help reduce the price to farm marine species like salmon and oysters. It will not only provide healthier seafood, but could reduce consumer costs for seafood,” Birch said.

These results were presented at the 2021 Society for Integrative and Comparative Biology meeting. This material is based upon work supported by the NH Agricultural Experiment Station, through joint funding of the National Institute of Food and Agriculture, U.S. Department of Agriculture, under award number 1013436, and the state of New Hampshire. Additional support was provided by the National Science Foundation.

Founded in 1887, the NH Agricultural Experiment Station in the UNH College of Life Sciences and Agriculture is UNH’s first research center and an elemental component of New Hampshire’s land-grant university heritage and mission. We steward federal and state funding, including support from the USDA National Institute of Food and Agriculture, to provide unbiased and objective research concerning diverse aspects of sustainable agriculture and foods, aquaculture, forest management, and related wildlife, natural resources, and rural community topics. We maintain the Woodman and Kingman agronomy and horticultural research farms, the Macfarlane Research Greenhouses, the Fairchild Dairy Teaching and Research Center, and the Organic Dairy Research Farm. Additional properties also provide forage, forests, and woodlands in direct support to research, teaching, and outreach.

Apply now for the SHF scholarship