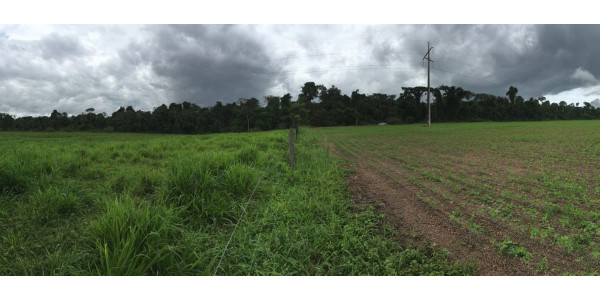 Researchers found that invertebrates such as earthworms, ants and termites were more vulnerable to the displacement of forests with pastures than by crops, while microbes showed the opposite pattern. (Photo: André L.C. Franco/CSU)

FORT COLLINS, Colo. — The clearing and subsequent instability of Amazonian forests are among the greatest threats to tropical biodiversity conservation today.

Although the devastating consequences of deforestation to plants and animal species living above the ground are well-documented, scientists and others need to better understand how soil communities respond to this deforestation to create interventions that protect biodiversity and the ecosystem. But that information has been lacking.

A team of researchers led by Colorado State University’s André Franco, a research scientist in the Department of Biology, conducted a meta-analysis of nearly 300 studies of soil biodiversity in Amazonian forests and sites in various stages of deforestation and land-use.

The new study, “Amazonian deforestation and soil biodiversity,” is published in the June issue of Conservation Biology and is co-authored by CSU Distinguished Professor Diana Wall, Bruno Sobral, professor in the Department of Microbiology, Immunology and Pathology at CSU, and Artur Silva, professor at the Universidade Federal do Pará in Belém, Brazil. It is also featured on the cover of the journal.

Overall, the researchers found that the abundance, biomass, richness and diversity of soil fauna and microbes were all reduced following deforestation. Soil fauna or animals that were studied include earthworms, millipedes, dung beetles, nematodes, mites, spiders and scorpions.

Franco, who hails from Brazil, said that this is the first time that all of the available scientific data related to soil biodiversity in Amazonian forests has been synthesized.

The research team also found that the way the land is used after the forest is cleared matters to soil biodiversity. Species of invertebrates such as earthworms, ants and termites — which are described as soil engineers — were more vulnerable to the displacement of forests with pastures than by crops, while microbes showed the opposite pattern.

Franco said the highest biodiversity losses were found on the side of the Amazon with the highest mean annual precipitation and in areas where the soil was very acidic.

“That means these areas should be higher priorities for conservation efforts,” he said.

“Very few studies looked at the impact of disturbances like wildfires and selective logging on these forests,” Franco said. “Yet logging is an official management strategy in the Amazon forest.”

In addition, the team found a lack of data from seven of the nine countries that the Amazon biome covers parts of, including Bolivia, Peru, Ecuador, Venezuela, Guyana, Suriname and French Guiana.

Sobral noted that biodiversity is a hot topic and was elevated recently with the release of a report from the United Nations, which found that nature is declining globally at unprecedented rates. But most of the scientific knowledge in the world about biodiversity relates to birds and mammals, he said.

The team is continuing this research in the Amazon, working with farmers’ associations and two research institutes in Brazil to collect and analyze soil samples with the goal of studying the consequences of this loss of biodiversity. Zaid Abdo, a bioinformatics expert and associate professor in the Department of Microbiology, Immunology and Pathology, has joined the CSU-based research team.

Sobral said it’s extremely important that the scientists work with local farmers and others who are impacted by the deforestation.

“We’re very focused on making sure the research isn’t disconnected from local communities’ needs and aspirations,” he said. “Our work is guided by what the farmers want to know and how scientific knowledge could shape their future sustainable development.”

Wall is also the director of the School of Global Environmental Sustainability at CSU, which provided travel funds for the research team.

Time for Service to Ag nominations

Building on our land-grant mission across Colorado
August 1, 2021