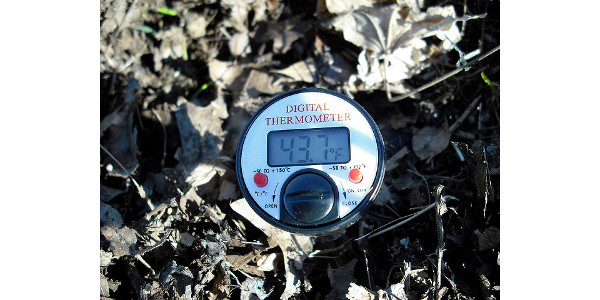 The soil temperature commonly cited for adequate corn and soybean germination and emergence is 50 degrees Fahrenheit, and that temperature is used as the base for calculating modified growing degree days (GDD) for most field crops. (Stephen Cochran via Flickr)

EAST LANSING, Mich. — Timing of spring crop planting is dependent on a number of variables. Seed availability, equipment readiness, field dryness, ability to conduct timely weed management (tillage and/or herbicide burndown), and other factors all play into the decision of when to begin planting. Another important consideration is soil temperature. The soil temperature commonly cited for adequate corn and soybean germination and emergence is 50 degrees Fahrenheit, and that temperature is used as the base for calculating modified growing degree days (GDD) for most field crops. See “Heat Unit Concepts Related to Corn Development” by Purdue University’s corn agronomist Bob Nielsen for more information on calculating heat units.

Stand uniformity is critical to achieve maximum yields, and uniformity of emergence timing is an important part of that. In addition to seeding depth, soil temperature is also a factor in determining the rate and timing of emergence. Corn requires about 119 GDDs using soil temperatures from planting to emergence. To put this in perspective, the maximum and minimum soil temperatures at 2-inch depth at the Michigan State University Enviroweather station in Coldwater on April 8, 2019 (the warmest soil date so far this year), were 62.4 and 50.9 F, respectively. (Note: That date was the third day in a row where air temperatures reached 72 F or above.) This generated 6.65 GDDs based on soil temperature. At that rate, the seed would be susceptible to insect predation, soil-borne diseases, potential flooding, etc. for approximately 18 days prior to emergence. In reality, only 4 GDDs were generated in the seven days following that date.

Egli and Rucker, 2012, conducted research at the University of Kentucky to investigate the impact seed vigor has on emergence. According to Association of Official Seed Analysts, 2009, seed vigor is defined as “those seed properties that determine the potential for rapid, uniform emergence and development of seedlings under a wide range of field conditions.” The authors used both low-vigor and high-vigor seed in the testing. In Figure 2A, seeds were grown in a greenhouse between 64 and 77 F while in Figure 2B the seeds were grown in a cool growth chamber at 50 F for 10 hours and 68 F for 22 hours (with 1 hour transition times).

When do Michigan soils tend to achieve optimal temperatures for corn emergence? What is the best source for finding out what these temperatures are in your part of the state? Part 2and Part 3 of this series will look at MSU’s Enviroweather system of weather stations and what historic spring soil temperatures have been in Michigan.