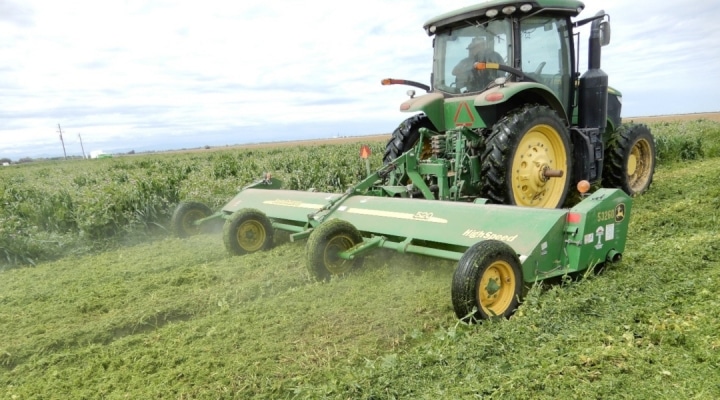 A group of California organic farmers is sharing information about their efforts to combine reduced tillage with the use of cover crops, which they have been planting on their vegetable farms for decades to protect soil while adding carbon and diversity to their production systems. This picture shows cover crop shredding at Teixeira & Sons in Firebaugh on April 4, 2020. (Courtesy Photo)

DAVIS, Calif. — A group of California organic farmers is sharing information about their efforts to combine reduced tillage with the use of cover crops, which they have been planting on their vegetable farms for decades to protect soil while adding carbon and diversity to their production systems.

“Every one of the pioneering farmers has seen tremendous benefits from the practices,” said Jeff Mitchell, UC Cooperative Extension vegetable crops specialist. “These are the very growing practices that we have demonstrated over two decades of research to benefit soil health, environmental conservation and the bottom line on plots near Five Points in Fresno County.”

The organic farmer research project is funded with a Natural Resources Conservation Service Conservation Innovation Grant (CIG) and aims to develop crop production system alternatives for vegetable crops. The farmers are seeing evidence of the ecological benefits, and also benefits that promote the public good.

The need for California farmers to adjust to changing times was to have been part of the dialogue at a public field day in March at Teixeira & Sons Farm in Firebaugh. It was postponed due to COVID-19 concerns. The event was to showcase Mitchell’s data and the experiences of long-time cover crop farmer John Teixeira of Firebaugh.

Teixeira began cover cropping 30 years ago in one of his organic fields. He wanted to build fertility, organic matter and water holding capacity in the soil. Ever since, he’s been growing cover crops ahead of tomatoes and several other commodities. This past winter, he grew a mixture of common, hairy and purple vetch, white oats, biomaster peas and bell beans. Teixeira estimates that it provided over 5,000 pounds per acre of dry biomass, which is supporting his 2020 tomato crop with elevated biological activity in the soil.

Mitchell’s study in Five Points has tracked impacts of winter cover cropping coupled with no-till since 1999.  Over the 21 years, some 37 tons of organic matter, or about 15 tons of carbon, have been added to the soil.  These inputs averaged about 3,700 pounds per acre of organic matter, or 0.8 tons of carbon annually. Year-to-year variability has been high, ranging from 8,800 pounds in 2000 when supplemented by irrigation, to 54 pounds in 2007 when, as in most years, the cover crops were grown with rainfall only. Cover crops were typically seeded by Nov. 15 each fall and terminated around March 15.

Earlier results from the study field have shown that when the cover crop and other crop residues are converted to a mulch and left on the soil surface, as much as five inches of water that would normally evaporate during a typical summer crop period stays in the soil.

Mitchell is coordinating the group of organic farmers who are conducting cover crop, tillage and mulch experiments. The farmers cultivate vegetables up and down the Central Valley from Meridian and Guinda in the north, to Dixon, Hollister, Madera, Five Points and Buttonwillow in the south.

“They are an incredible group of people,” Mitchell said. “They have taken soil, farm and human health goals to dramatically important lengths.”

As organic farmers, they have always been in the forefront of soil care and attention to soil biology, Mitchell said, but they’re now working together to implement such innovations as virtually year-round soil cover, reduced disturbance tillage, and integration of grazing animals into their fields. Their objective is to enhance the health of their soils, the health of their farms, and the quality of the vegetables that they produce.

Tom Willey, one of the project’s farmers from Madera, puts it this way, “What we’re attempting to do is up our game on natural systems mimicry on our farms, break through the barrier of over-dependence on tillage in organic systems.”

Eric Brennan, a USDA Agricultural Research Services organic systems horticulturist in Salinas, and integral partner in the effort, has studied cover crops in the Salinas Valley.

“Cover cropping regularly, every winter if possible, is one of the ‘lowest-hanging fruit’ practices that vegetable farmers can use to improve soil quality and nutrient management in their production,” Brennan said.

“Everyone used to talk about ‘barriers to adoption’ when it came to cover crops. Now the question will more aptly be, ‘What happened to those folks who didn’t change and adopt?’” Mitchell said. 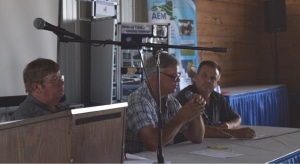 More and more viruses ‘spilling over’