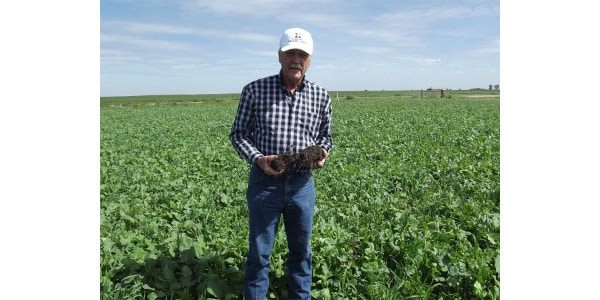 Edmunds County farmer Dennis Hoyle attributes any profits he sees today to what he doesn’t spend thanks to the many soil health practices he implements. (Courtesy of SDSHC)

PIERRE, S.D. — In times like these, it’s what cattle and crop producers don’t spend that makes the biggest difference to their bottom line.

“Because prices are not very good right now, there isn’t a lot a farmer or rancher can do to get more in the market, so they are looking to cut expenses,” Dacotah Bank Agricultural Banker Trevor Samson explained.

Nick Jorgensen agrees. Implementing soil health practices are how the Ideal, SD, cattle and crop producer and his dad, Bryan, cut input costs across their operation.

“We are doing things that if we were not doing them, we would not be able to stay in business long term,” Jorgensen said. “In times like this, practices that save you money allow you to make a little money instead of burn through equity.”

Practice by practice, Jorgensen explains how by focusing on soil health, the family saves $100 per acre and $350 per head annually.

These aren’t guestimates – Jorgensen is a numbers guy. Before returning to his family’s farm in 2014, Jorgensen earned master’s degrees in business administration and economics. In addition to saving hundreds of thousands in operational costs, Jorgensen explains the practices they implement on their family’s more-than-a-century-old farm build the soil’s organic matter, increase its water-holding capacity and create a landscape where wildlife thrive.

“At the same time we’re cutting costs, we are making our ground better. And we’re doing it on a large scale,” Jorgensen said of the nearly 13,000 acres his family farms.

At 29, Jorgensen says he has never operated tillage equipment. Inspired by the native prairie system, his dad, Bryan, began implementing no-till and other soil health practices in the 1990s.

“If you ever get the opportunity to walk out into a field of full-season cover crops, it is beautiful. There are birds, bees, butterflies and no weeds – I wish I could show this to someone who is against commercial agriculture,” Jorgensen said. “We are large commercial farmers who farm in a way that makes Mother Nature happy. You just go out there and you can feel it. As a logical guy, it’s a silly thing to say, but it’s the truth.”

The father and son team share details of their soil health story in the Merit or Myth video series (https://youtu.be/sPKSHXH2n2w).

Farming and raising cattle in a way that builds soil health and works with nature is also a focus of Edmunds County farmer Dennis Hoyle. Raised by a conservation-minded dad, Hoyle says taking care of the soil has always been “front and center” on his farm. And yes, cutting costs also motivated his decision to no-till plant winter wheat in 1982.

“Money and moisture were my biggest drivers,” said Hoyle, who has farmed exclusively no-till since 1986.

Although he has raised traditional crops, like corn and soybeans in the past, today Hoyle says his number one crop is organic matter. “Three-dollar corn has liberated me. I heard a market guru say that farmers can buy corn cheaper than they can raise it. So, I thought if this is the case, and if I am not going to make any money raising grain, I might as well do something beneficial for my land.”

Today, a large percentage of his crop acres are planted to diverse mixes of full-season, high carbon cover crop, like sorghum, Sudangrass and sunflowers that his grassfed cattle graze and wild pheasants thrive in. The added benefit? Research on Hoyle’s farm shows when he plants a high-carbon cover crop and his cattle graze it, in one season, soil organic matter increases by one quarter of a percent.

“I have always been an outdoor person. I enjoy nature as it is. I don’t think I need to drain a wetland. I have been blessed by the efforts of my ancestors that I am able to work the land. I want to make a living off the land. And while I am making a living off it, I want to improve it and share it with other creatures,” Hoyle said of farm acres which are home to deer, wild pheasants and more than 51 other species of birds.

Now, he is quick to clarify that although he values wildlife, he would prefer coyotes did not thrive on his land.

Not held to conventional expectations as to what his farm should look like, Hoyle has built a business model that largely cuts out the middleman. So even in today’s depressed markets, he is able to maintain a positive balance sheet.

“I attribute any profits I make to what I don’t spend.” Hoyle explained that because of his soil health practices and his focus on growing organic matter, he is not spending on seed and is able to reduce chemical costs. He harvests his crop acres with his cattle instead of equipment. “When I sell an animal, I get about as much for that animal as a grain farmer would get for a semi-load of corn. I didn’t have to spend money on seed or to combine that grain or spend to dry that grain.”

Together with help from his adult children and their families, he directly markets a large percentage of his grassfed cattle through social media.

“I’m able to finish cattle without a feedlot. So, I don’t need permits, and my neighbors aren’t mad at me,” he explained.

The family farm also includes a wild pheasant hunting camp. “Little pheasants have to have bugs and dew to survive. And when you have healthy soils, your beneficial insects outnumber the detrimental insects, so you don’t have to use insecticide,” Hoyle said. “Anything you do that helps wildlife also helps soil. Anything you do to help the soil, helps wildlife.”