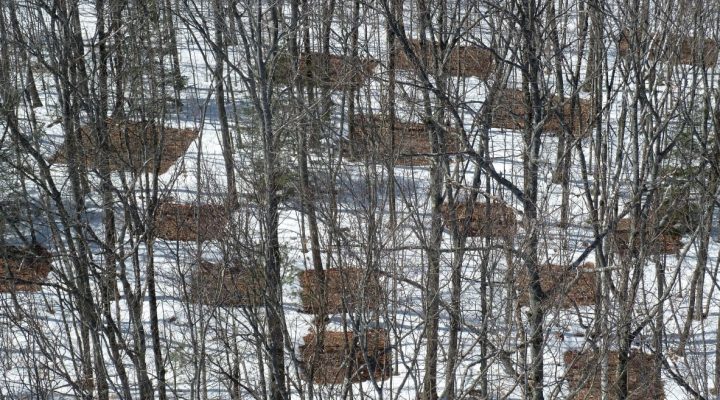 DURHAM, N.H. — While scientists and policy experts debate the impacts of global warming, the Earth’s soil is releasing roughly nine times more carbon dioxide to the atmosphere than all human activities combined. This huge carbon flux from soil, which is due to the natural respiration of soil microbes and plant roots, begs one of the central questions in climate change science. As the global climate warms, will soil respiration rates increase, adding even more carbon dioxide to the atmosphere and accelerating climate change?

Previous experimental studies of this question have not produced a consensus, prompting University of New Hampshire scientist Serita Frey, professor of natural resources and the environment, and more than 40 researchers from across the globe reviewed data from 27 studies across nine biomes, from the desert to the Arctic. Their analysis was published recently in Proceedings of the National Academy of Sciences. This work represents the world’s largest dataset to date of soil respiration response to experimental warming.

“This work is important because, rather than focusing on the warming response at a single site, it aggregates data collected from many sites across a range of ecosystems. This makes the conclusions and predictions more robust,” Frey said.

One prediction from the synthesis is that rising global temperatures result in regionally variable responses in soil respiration, with colder climates being considerably more responsive. “Consistently across all biomes, we found that soil respiration increased with soil temperature up to about 25° C (77° F),” said Joanna Carey, a postdoctoral scientist in the Marine Biological Laboratory Ecosystems Center in Woods Hole, Mass., and the lead scientist on the study. Above the 25°C threshold, respiration rates decreased with further increases in soil temperature. “

“That means the Arctic latitudes, where soil temperatures rarely, if ever, reach 25°C, will continue to be most responsive to climate warming. Because there is so much carbon stored in frozen soils of the Arctic, this has really serious repercussions for future climate change,” Carey said.

The team also found that soil microbes in experimental warming studies showed no sign of adaptation — meaning a muted respiration response to rising temperatures — in all of the biomes studied, except desert and boreal forest. This indicates that soils will typically respond strongly to increasing temperature by releasing more carbon dioxide, said Jianwu Tang with the Marine Biological Laboratory Ecosystems Center and a lead scientist on the study.

“Going forward, we need to better explore the biome-specific responses as global temperatures shift beyond the historic range,” Frey said. To understand how global carbon in soils will respond to climate change, the authors stress, more data are needed from under- and nonrepresented regions, especially the Arctic and the tropics.

This material is based upon work supported by the NH Agricultural Experiment Station, through joint funding of the National Institute of Food and Agriculture, U.S. Department of Agriculture, under award number 003421, and the state of New Hampshire.

Founded in 1887, the NH Agricultural Experiment Station at the UNH College of Life Sciences and Agriculture is UNH’s original research center and an elemental component of New Hampshire’s land-grant university heritage and mission. We steward federal and state funding, including support from the USDA National Institute of Food and Agriculture, to provide unbiased and objective research concerning diverse aspects of sustainable agriculture and foods, aquaculture, forest management, and related wildlife, natural resources and rural community topics. We maintain the Woodman and Kingman agronomy and horticultural farms, the Macfarlane Greenhouses, the Fairchild Dairy Teaching and Research Center, and the Organic Dairy Research Farm. Additional properties also provide forage, forests and woodlands in direct support to research, teaching, and outreach.