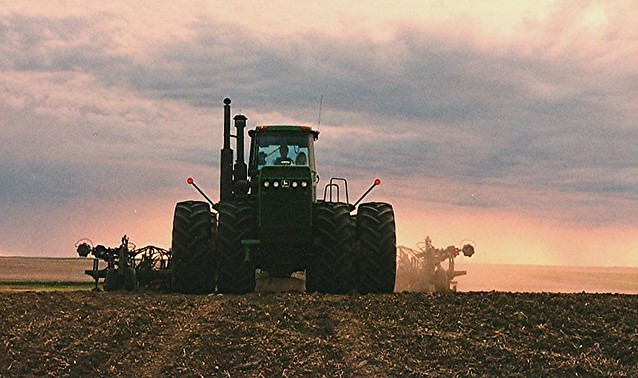 In the 18 states that grow most of the nation's corn, only 58% of the crop had been planted as of last week — a far cry from the 90% that would ordinarily be planted by that point. (Loco Steve, Flickr/Creative Commons)

DES MOINES, Iowa (AP) — Between the country’s trade dispute with China and the seemingly endless storms that have drenched the central U.S., Iowa farmer Robb Ewoldt has had plenty of time to think about whether it’s too late to plant this season, how much federal aid he might get if he does or whether to skip it altogether and opt for an insurance payment.

Instead of driving his tractor, he’s driving a truck these days to earn a living while wondering how long it will be before he can return to his fields.

“Sometimes I think, what the heck am I doing farming?” he said recently by phone while returning home after hauling a shipment of dry ice to Chicago. “When you owe the bank money, you do some pretty crazy stuff.”

Ewoldt is one of thousands of Midwestern farmers facing such decisions as they endure a spring like no other. It started with poor corn and soybean prices falling even further as the U.S. and China imposed new tariffs, and was compounded by torrential rain and flooding that has made planting impossible and killed off crops that were just starting to emerge.

Conscious that the trade dispute was devastating American farmers, President Donald Trump promised $16 billion in aid — an increase over last year’s $11 billion in aid — but the promise has only added to farmers’ confusion about how to approach this strange spring.

That’s because details about how much money farmers would receive won’t be released until later, to avoid influencing what crops they decide to plant. While there’s a rationale behind keeping the aid details secret, it adds another layer of uncertainty for farmers already guessing about the weather, future crop prices and how much they would get in insurance payments if they don’t plant a crop.

“It’s a take what you can get and keep moving year,” said Todd Hubbs, an agricultural economist at the University of Illinois. “Depending on how the payments and everything break out, each farm is different.”

In the 18 states that grow most of the nation’s corn, only 58% of the crop had been planted as of last week — a far cry from the 90% that would ordinarily be planted by that point. In states that grow nearly all of the soybeans, less than half of the normal crop had been planted. Farmers have even taken to Twitter — creating a #noplant19 hashtag — to commiserate and share photos of their swamped fields.

For Jeff Jorgenson, it’s an all-consuming question of how much of his roughly 3,000 acres (1,214 hectares) of southwestern Iowa land he can profitably farm. About a quarter of it can’t be farmed due to Missouri River flooding, and much of his remaining property has been inundated with rain and water from the neighboring Nishnabotna River.

Navigating muddy roads in his pickup truck this week, he tried to figure out whether it would be worth pumping water off his land or whether that would even be possible. Normally it wouldn’t be worth the effort, but with the prospect that the Midwest’s miserable weather will reduce the nation’s fall harvest, corn and soybean prices have started to rise and planting every acre possible has become more attractive than settling for insurance that would pay roughly half the revenue of a normal crop.

Jorgenson, 44, said it’s a puzzle trying to figure out how much land should remain unplanted and eligible for insurance payments, how much should be planted, how much money in federal aid will be available and whether those funding sources will be enough to cover his operating loan.

Since Bob Worth started farming in 1970, this is the first year he’s opted not to plant on most of his 2,300 acres (931 hectares) near the southwestern Minnesota community of Lake Benton. It was a difficult choice, but one Worth said he felt obligated to make given the ducks that are swimming where his corn and soybeans should be growing.

“I’m not going to try to destroy my ground to get a crop in,” he said, noting that planting equipment would rut and compact his land.

Despite insurance payments he will receive, Worth, 66, said he’ll need to refinance loans and lose some of the equity has built up on land that has been in his family for generations.

The deadline for not planting and taking an insurance payment without a penalty varies depending on the state and crop, but the decision time has either passed or is approaching. Hubbs, the Illinois economist, said choosing to opt out, especially when prices are rising, is agonizing for farmers but may be the right choice because of the risk of a poor harvest when planting late in soggy ground and the possibility that the farmer won’t be able to harvest the crop before the weather turns cold.

Hubbs said planting late won’t work out for many farmers unless summer and fall weather conditions are nearly perfect — a scenario that he said seems hard to imagine, given that “storms just keep firing up and moving through.”

Chad Hart, an agricultural economist at Iowa State University, said he worries that the federal aid Trump announced will encourage some farmers who would normally forgo a crop to instead risk planning on wet land. That’s a tough decision for individuals, but collectively it could reduce the supply of corn and soybeans and lead to higher prices.

“We’ve been stuck in a pattern of overproduction, and this could change that,” Hart said.

Ewoldt, who farms on about 1,100 acres (445 hectares) he rents from relatives near the Mississippi River outside Davenport, said he hopes he can figure out what’s best for his farm and his family. Ewoldt, 47, said he’s good at producing a crop but that figuring out what to do in the coming weeks seems like guesswork.

“You’re trying to do the algebra equations and figure things out, but you have too many unknowns right now,” he said. “Nobody has a clue what we’re doing.”