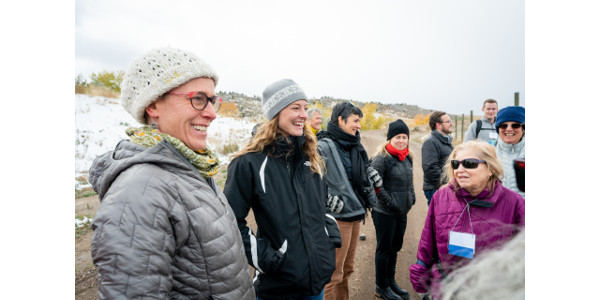 Researchers from CSU’s Colleges of Natural Sciences and Veterinary Medicine and Biomedical Sciences greeted the journalists on the Foothills Campus. Four years after releasing 10 bison in northern Colorado, there are now 77 animals in the herd and it is serving as a seed herd for other conservation efforts in the U.S. (Photos: Joe Mendoza/CSU Photography)

FORT COLLINS, Colo. — Hundreds of journalists from across the country took part in day-long tours Thursday, Oct. 10, as part of the 29th annual conference of the Society of Environmental Journalists hosted by Colorado State University.

The tours included experts from CSU and ran the gamut, exploring the Rocky Mountain Arsenal, National Renewable Energy Lab, Rocky Mountain National Park, farms and a dairy operation, and the Globeville and Elyria-Swansea neighborhoods in north Denver for a discussion on environmental justice.

Some 700 people registered to attend this year’s SEJ conference, according to organizers, making this the organization’s largest national meeting since 2011.

Due to a drastic drop in temperatures and falling snow on Thursday, reporters on the tour originally scheduled for Soapstone Prairie Natural Area stayed closer to campus. More than 30 journalists started the day at the Fort Collins Museum of Discovery, the only museum in the world that houses black-footed ferrets, according to Kimberly Fraser, outreach specialist for the National Black-footed Ferret Conservation Center with the U.S. Fish & Wildlife Service.

Fraser described the work to reintroduce ferrets at places including Soapstone Prairie as “the best story we have in American conservation.”

Researchers from CSU’s Colleges of Natural Sciences and Veterinary Medicine and Biomedical Sciences greeted the journalists on the Foothills Campus.

Kate Wilkins, postdoctoral fellow in the Department of Biology, described her research on the social consequences of the reintroduction of bison on Soapstone Prairie Natural Area and Red Mountain Open Space in late 2015.

“There is very little understanding about people’s response to species reintroductions,” she explained.

Wilkins, who conducted this research while in the Warner College of Natural Resources, said her team looked at visitor place attachment. Based on visitor surveys, the research team did see a significant increase in people’s attachment to the Soapstone Prairie area following the reintroduction.

Jennifer Barfield, assistant professor at CSU and a reproductive physiologist, described how the animals in the Laramie Foothills Bison Conservation herd all have Yellowstone genetics, which is of historic and cultural importance.

Four years after releasing 10 bison in northern Colorado, there are now 77 animals in the herd, she told the crowd.

“We want to be a seed herd and provide animals to other herds, so we do get these [Yellowstone] genetics out,” said Barfield. The herd is already fulfilling that goal, by providing bison to the Bronx Zoo, Pueblo of Pojoaque in New Mexico, and zoos in Minnesota and Oakland, California.

The Laramie Foothills Bison Conservation Herd is a collaborative effort involving CSU, Larimer County and the city of Fort Collins. The U.S. Department of Agriculture’s

Animal and Plant Health Inspection Service was a founding member of the initiative.

Barfield talked about the importance of collaborating with Native American tribes, many of which are reintroducing bison on native lands for cultural and economic purposes. When asked about these partnerships, the researcher said it would be a major oversight to not include tribes in these efforts.

Barfield also talked about the science behind the project and described the cleansing process she and her team use on reproductive materials to ensure that the bacteria that cause brucellosis are not passed on to future bison. The spread of brucellosis in a livestock herd can lead to spontaneous abortions and create financial losses for farmers.

The researchers at CSU use techniques developed for the livestock industry, which are similar to those commonly used for human patients in fertility clinics.

Sarah Reed, a former CSU researcher and executive director of the Robert & Patricia Switzer Foundation, presented findings from a study that looked at the effects of recreation on wildlife.

“There’s a lot of doubt [about this issue], but it’s not an intractable problem,” said Reed. “The challenge with this topic is that it’s not one where we can point a finger at somebody else. It will require us all to give us a little bit of time or space.”

Results from this research, led by CSU graduate student Courtney Larson, were recently featured in The New York Times.

Putting the Pieces Together Oct. 18-20