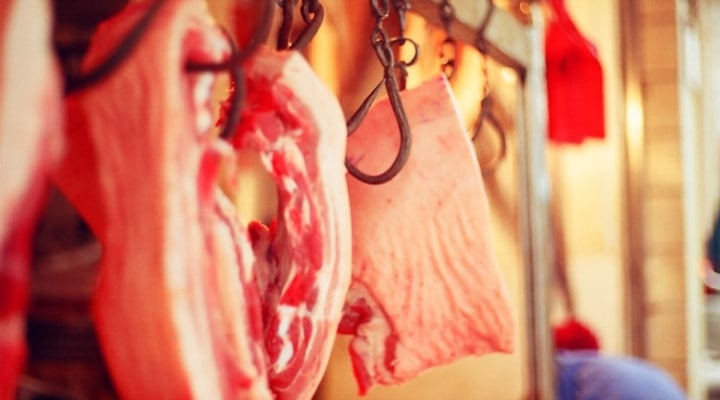 The price of pork rose 97% over a year earlier despite increased imports of China's staple meat and the release of thousands of tons from government stockpiles. (Lynn Lin, Flickr/Creative Commons)

BEIJING (AP) — Soaring pork prices that nearly doubled in December over a year ago kept inflation at a seven-year high despite government efforts to ease meat shortages caused by a disease outbreak, official data showed Thursday.

Surging inflation adds to challenges for communist leaders who are trying to shore up slowing economic growth and resolve a tariff war with Washington.

The price of pork rose 97% over a year earlier despite increased imports of China’s staple meat and the release of thousands of tons from government stockpiles.

Food prices rose 17.4% and overall consumer inflation was 4.5%, well above the ruling Communist Party’s official target of 3%. That matched November’s inflation, the highest since 2012.

China produces and consumes two-thirds of the world’s pork but supplies plunged as authorities destroyed pigs and blocked shipments to contain an outbreak of African swine fever that was confirmed in August 2018. Farmers have allowed herds to dwindle.

Global pork prices have climbed as Chinese importers buy more from Canada, Europe and other suppliers.

Beijing announced in September it would lift punitive tariffs imposed on U.S. pork and soybeans during its trade war with Washington. That would ease pressure on Chinese pig farmers who use soy as animal feed.

The U.S. Department of Agriculture forecast in October that China’s 2020 pork production would fall 25% from a year earlier. The forecast gap of 12 million metric tons would be equivalent to almost the entire U.S. annual production.

Authorities destroyed 390,000 pigs last year and a total of 1.2 million since the start of the outbreak, the Agriculture Ministry reported Wednesday.

Forecasters expect shortages to persist because many Chinese farmers have stopped raising pigs and others will need time to rebuild their herds.