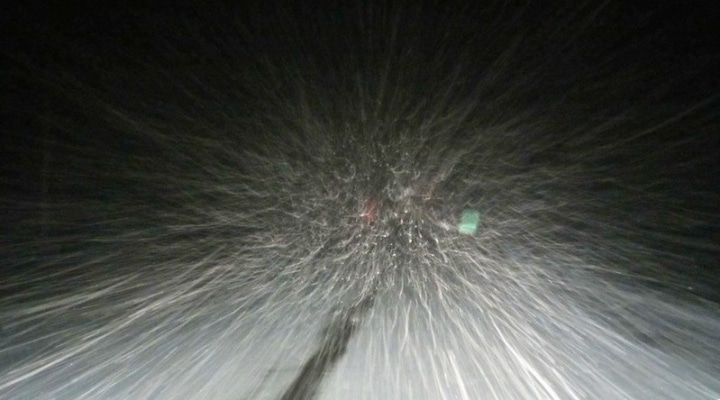 “The hardest thing about making a decision is usually about changing the plan.”

I got snowed in in Syracuse, Thursday night.

It’s that time of year, I am travelling for meetings.  It’s to be expected…but that doesn’t mean I like it.

Syracuse, which I believe has the corner on the market for lake effect snow dumpage, was showing her true colors Thursday afternoon and evening while I was out there.

I managed to make it out to the conference earlier that morning with no problems. It was supposed to be a day trip.

I had a plan.  The meeting was going to go until about 6, I would stay and visit for an hour and then head home, to be back in Greenwich by 10 pm Thursday night.  I wouldn’t get to see the kids before bed but at least I would be home, able to get them up in the morning, and then leave for another meeting in Vermont on Friday. It was a busy week.

That was the plan…

As I got ready to head east, homeward, Thursday night from Syracuse, my gut was not feeling right.  It was dark, I could see the snow coming down, and the wind blowing outside. I kept trying to settle myself thinking that if I could just get out of the lake effect snow zone, I would be okay and it would be smooth sailing for the rest of the way home, or two-thirds of the trek anyways.  I could do that.

When I walked through the lobby of the convention center, on my way to the car, I  saw some new arrivals and asked, “How was the drive? Did you come from the east?” They looked at each other, then at me, and I could see they were trying to downplay the challenging travel conditions.  The husband and wife raised their eyebrows and said, “It’s not great” with a wince.

The man finished by saying that the snow had started way back… which was quite a bit further beyond what I was considering the snow belt region.

I was imagining my hands gripped tight to the steering wheel, eyes trying not to go buggy from the snow coming at my car in the headlights.  I could already feel the tension in my back as I tried to search for headlights up ahead.

Bundled up, I left the lobby and out into the cold, dark, swirling snow of January.  I got in the car, turned the defrost on and got back out and started wiping off the snow laden car.  I could just see the thruway from the parking lot. I saw a plow creep along… not a car behind it. Would I be the only foolish one out on the road tonight?

Car wiped off, I got in and sat for a moment, to give it a little more time to warm up and melt the ice…ugh.

I looked at the temperature, 9 degrees.

And that’s when I agonizingly pulled the plug on my plan.  This was absolutely ridiculous for me to strike off, by myself, on a night like tonight, 3 hours from home. All because I had a plan.

I felt out of sorts.  Now what? I had changed the plan.  Part of me felt less strong, because I was choosing to stay put instead of heading home.  Was it really that bad?  Was I over-reacting? Was that my ego talking?  Somebody needs to put that ego to bed!

After my momentary deer in the headlights feeling because the plan changed and especially the disappointment at not making it home to the kids, I actually felt relief. I hate driving in bad weather, and all of the worry that goes into it. I may take lots of risk in business, but not as much when it comes to driving.

I grabbed my computer–because that is all I had–and went back into the hotel and got myself a room.  I might have hopped over to the mall that was down the road to grab a pair of pajamas and toothpaste too.

After a few phone calls I was snug as a bug in a rug, snowed in, in Syracuse.  And I was home by 11 the next day.

Sometimes you just have to make the call, and change the plan. It all worked out for the best.  🙂

Here’s to winter in the Northeast!  Ground Hog’s Day is coming, and I am hoping there is good news that spring is on its way!

Have a great week!

Shouldn’t this be what winter is all about
February 2, 2020