Home » SMV signs save lives, use them properly
education safety 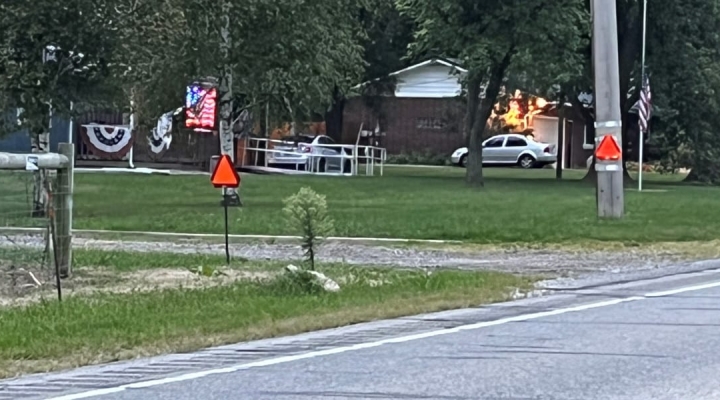 It is not hard to find misuses of the SMV emblem. This photo shows slow-moving vehicle signs being used improperly. (Jeff Burbrink, Purdue Extension)

GOSHEN, Ind. — The reflective red and orange triangle commonly seen on slow-moving vehicles like Amish buggies, tractors, wagons and construction equipment is a familiar site in rural areas. The slow-moving vehicle (SMV) signs were created to warn fast moving traffic of a potential hazard ahead.

According to the Indiana law, which is similar to many other state’s vehicle codes for slow-moving vehicle signs, and the National Ag Safety Database, SMV emblems are restricted to use on:

When bearing the SMV emblem, vehicles are prohibited from traveling more than 25-miles-per hour, even if they are capable of reaching higher speeds.  This rule helps motorists to avoid confusion of having a fast-moving vehicle labeled as a slow mover.

There are legal standards for proper placement and design of the signs. SMV emblems are a standard, red-orange fluorescent, equilateral triangle with a red reflective border. By law, they must measure a minimum of 13.8 inches across. In terms of placement, SMV triangles are to be mounted point up, on the back of the vehicle as close to the center as possible. Proper mountings should be between two to six feet from the ground; they are not permitted to be placed higher than 10 feet from the ground.

It is not hard to find misuses of the SMV emblem all over the county. It is illegal to place a SMV emblem on a still object. For instance, they are not to be placed on mailboxes or used as markers for driveways. SMV signs should not be used as an attempt to slow traffic, such as in a school zone.  The misuse of the emblem is not only illegal, but it causes drivers to take the SMV sign less seriously, and that could endanger lives.

The SMV emblem is your warning to be vigilant. When you see one, slow down and stay well back. This will increase your ability to see the road ahead, and it also ensures the driver of the slow-moving vehicle can see you in his mirrors. Do not attempt to pass unless you are absolutely sure there is room to do so. Some vehicles bearing a SMV symbol can be very lengthy, adding additional challenges to passing.

SMV signs lose their reflectivity over time. SMV emblems must be visible from 500 feet. If they begin to fade, they must be replaced. Many local farm supply stores and equipment dealers have replacement stickers that can be applied over faded SMV signs. In addition, if one slow moving vehicle is pulling another, such as tractor pulling a hay wagon, the SMV emblem must be mounted on the rear vehicle.

SMV signs save lives, use them properly
September 22, 2022