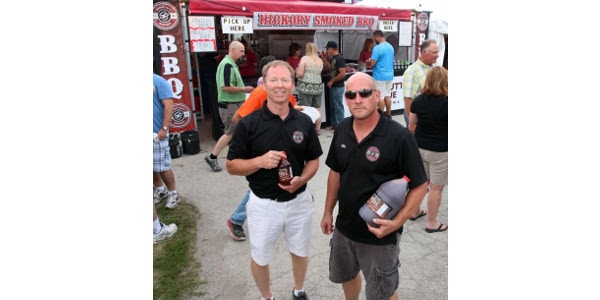 Smokin’ Butt is a “second full-time job” for Billy Sheredy, and the main job for his partner Rick Willows, a former pig farmer. The two started doing backyard barbecue competitions after becoming neighbors in 2008. That led to participating in events sanctioned by the Kansas City Barbeque Society. (Courtesy of Iowa Pork Producers Association)

Last month, 544 pork fans nominated 65 Iowa restaurants as contenders for the top honor. The two restaurants with the most votes in each of IPPA’s eight districts made up the starting “Sweet 16” bracket. Voters then decided which advanced to the “Elite Eight,” “Final Four,” and championship round, which wrapped up April 1.

“This means a lot,” said Billy Sheredy, co-owner of Smokin’ Butt. “We’re pretty confident that we have a good product, but when you’re in a competition like this, and it takes you all the way to the end, it truly lets you know that you’re putting out something really good.”

Smokin’ Butt is known for—and named after—its slow-smoked pulled pork. While the meat comes from a shoulder cut, many Americans refer to it as “pork butt.”

Pulled pork is the No. 1 seller at Smokin’ Butt, where the meat is coated with the restaurant’s own dry rub recipe, then cooked low and slow over hickory wood—at about 190 degrees for 19 to 22 hours.

The lengthy process is “the trick” to moist, tender pork, Sheredy said. Plus, the butts are simply pulled apart rather than shredded. That keeps chunks of the meat’s bark, the dark and flavorful crust that forms during cooking, intact.

According to Sheredy, each sandwich is “overloaded” with 6 to 8 ounces of pork on a white bun, and Smokin’ Butt’s signature barbecue sauces are available on the side. Pork also is sold in 1-pound quantities, for to-go orders or as part of a Family Meal Deal. In addition, pulled pork tops off nachos and Smokin’ Butt’s “Award Winning Mac -n- Cheese.”

The restaurant, open Fridays and Saturdays, sells about 400 pounds of pulled pork each week from its location inside the Red Hawk Golf & Learning Center.

Smokin’ Butt is a “second full-time job” for Sheredy, and the main job for his partner Rick Willows, a former pig farmer. The two started doing backyard barbecue competitions after becoming neighbors in 2008. That led to participating in events sanctioned by the Kansas City Barbeque Society.

They eventually began bottling their own barbecue sauce, now sold at many Hy-Vee and Fareway stores in eastern Iowa, and later expanded into the catering business, as well as making appearances at fairs and festivals. The restaurant opened in November 2019.

“This contest always reveals the best of the best in both pulled pork and loyal customers,” said Hannah Spurr, IPPA’s consumer outreach director. “As the state bounces back from COVID-19 closures, we encourage barbecue lovers everywhere to support this year’s ‘Sweet 16’ and so many other restaurants serving mouthwatering Iowa pork!”

Along with bragging rights, Smokin’ Butt will receive $250 and a Pulled Pork Madness plaque.

Full list of the 2021 Pulled Pork Madness restaurants that competed in the bracket rounds: