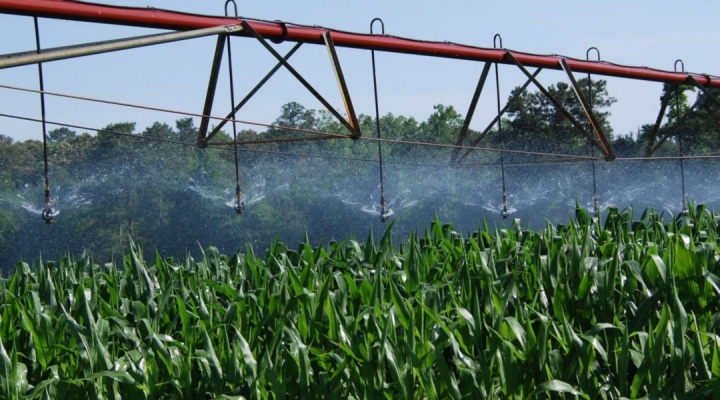 “In some years we have ample rainfall to produce very good yields, while in other years, dryland yields are near zero,” said Porter, associate professor in the Department of Crop and Soil Sciences at the University of Georgia. “Even in seasons with ample rainfall, research has shown that the distribution of the rainfall is more critical than the total amount.”

The results of Porter’s research in the College of Agricultural and Environmental Sciences and UGA Cooperative Extension have shown that the implementation and incorporation of irrigation scheduling tools into production practice has the potential to not only increase water use efficiency — but also to increase crop yield and profitability.

“Poorly timed droughts can cause significant yield reductions, especially if a valid irrigation scheduling strategy is not employed,” Porter said. “The typical farmer practice is to follow a checkbook or calendar water schedule method where a set rate of irrigation is applied to the crop per week based on historical values and measured precipitation. This method is very conservative in all row crops produced in Georgia and typically applies the highest amount of irrigation.”

Porter added that while the UGA checkbook method is an excellent guide, a method based on historical averages is not going to hit the target every time, especially as weather patterns change.

While higher technology options are a bigger time and financial investment, the results are often worth it.

In addition to the checkbook method, Porter said that there are four or five different smart apps and online scheduling tools available to producers. While the checkbook method is the “backbone,” using these newer technologies allows for adaptation based on real-time weather data.

Producers looking for the next level of irrigation scheduling can explore soil moisture sensors, which allow for real-time monitoring in the field. The proximity to the crop allows producers to see what that specific crop needs at any given time.

The most advanced option available is a combination of soil moisture sensors and online scheduling tools. Porter noted that these technologies, if used correctly, can make or break a crop.

Installing a sensor in the field and using an online scheduling tool to record crop type and planting date allows a system to recommend irrigation amounts specific to the crop and specific planting data.

“My studies have shown that the implementation of irrigation scheduling technologies such as soil moisture sensors or scheduling applications can increase yields in peanuts by approximately 20% while reducing irrigation applied by up to 60%,” Porter said, adding that these reductions were noted in extremely wet years, where the advanced irrigation scheduling methods only called for two or three irrigation events, compared to methods such as the checkbook, which irrigates weekly.

These findings are not isolated to peanut crops. In 2021, Porter’s cotton irrigation study did not require irrigation after mid-June. The peak water use in cotton is usually during July, however there was ample rainfall during the rest of the season. It can be very difficult for a producer to decide not to irrigate during this time of the season, but advanced methods help producers to make these decisions with confidence.

Reductions in irrigation can lead to major cost savings for farmers and benefits to the environment. The average season calls for 8 to 12 inches of irrigation, according to Porter. At an estimated $7 per acre-inch in electrical energy costs for pumping irrigation water, plus an average of $20 per acre-inch for diesel, the savings to producers — and the planet — are substantial.

Based on the electrical energy costs above, there is an estimated savings of up to around $250 per acre in peanuts. Assuming roughly 800,000 total acres of peanuts are planted in Georgia and 50% of those acres are irrigated, there is a potential impact of $100 million, according to Porter.

While these numbers are estimates based on research trials, Porter explained that there are opportunities for significant savings across the state in all crops if advanced irrigation scheduling is adopted and used correctly.

“If you don’t put science behind your irrigation scheduling, you lose on the bottom line,” Porter said.

From farm to vacation rental table