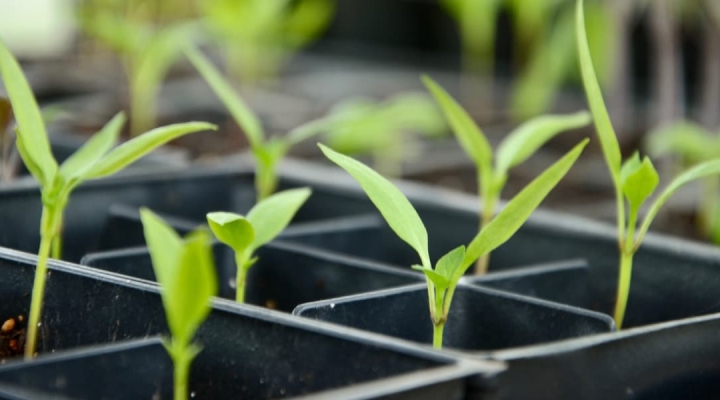 “Mizzou is a world-class academic home that has tremendous student and faculty researchers at all levels,” Meyers said. “The Danforth Center is really focused on plant science, and our strengths are our state-of-the-art facilities as well as our relationships across the St. Louis area, a hub for both the biotech and agriculture industries.” (Amber/Unsplash)

COLUMBIA, Mo. — Blake Meyers’ interest in plant science reaches back to his childhood, when he helped his mother tend to the family garden of flowers and vegetables in Williamsburg, Virginia.

Today, Meyers is a professor of plant science and technology at the University of Missouri and a researcher at the Donald Danforth Plant Science Center, an independent, not-for-profit research institute in Saint Louis County. In May, he became the 12th MU faculty to be elected into the National Academy of Sciences (NAS), one of the highest honors a U.S. scientist can receive.

“Mizzou is a world-class academic home that has tremendous student and faculty researchers at all levels,” Meyers said. “The Danforth Center is really focused on plant science, and our strengths are our state-of-the-art facilities as well as our relationships across the St. Louis area, a hub for both the biotech and agriculture industries.”
Meyers credits the mentors and supervisors that assisted him throughout the various stages of his career, and he enjoys paying it forward by mentoring the many bright young scientists that work with him at the Danforth Center.

“I now get to see where people have moved on to after working in my lab, to various positions in academia, government and industry,” Meyers said. “It is rewarding to see the impacts they make, and to think that maybe I contributed in small ways at an important stage in their careers is a great honor and privilege.”

“As a flagship, land-grant, AAU institution, we provide our faculty with state-of-the-art tools and investments so they can compete at the national level,” Choi said. “Our partnership with the Danforth Center allows plant science research to be expanded through rich collaboration, and we look forward to Professor Meyers’ continued success as he and his colleagues aim to solve some of the biggest challenges in plant sciences.”

Established under a congressional charter signed by President Abraham Lincoln in 1863, the NAS is an active, working Academy whose members advise the nation on problems where scientific insights are critical.
Meyers and his team study small ribonucleic acid (RNA) – a nucleic acid present in all living cells that has structural similarities to DNA – in plants to help maximize crop yields, which could have massive implications for addressing food insecurity around the world while helping the environment at the same time.

“Our lab studies RNAs, particularly those that function in pollen production, which plays a key role in the production of hybrid crops,” Meyers said. “Hybrid crops have tremendous yield advantages; they can produce up to 50% more crop for a given area. So, for the same land and chemical inputs, you can produce much more yield, which is a huge benefit to the environment, given increasing concerns about environmental degradation and sustainability.”
While an undergraduate researcher at the University of Chicago, Meyers studied a wildflower species. He later worked with lettuce, a billion-dollar crop in California, during his graduate studies at University of California, Davis. As a post-doc at UC Davis, he began researching the molecular biology of corn, a crop his lab at the Danforth Plant Science Center continues to study today.

“When I was a post-doc, I was working for a company where the goals were more industrial compared to academic,” Meyers said. “Working on corn and lettuce really gave me an appreciation for the impact of molecular biology on crop outputs, and it inspired the work I do today.”

Meyers first started his own lab in 2002 at the University of Delaware, where he began studying Arabidopsis, a plant species known for its usefulness in genetic experiments as a model organism, before moving on to study rice, soybeans and corn.

“The technology and molecular tools we can use to answer our scientific questions have developed incredibly during the last 20 years,” Meyers said. “This includes the ability to rapidly sequence the genome of a particular crop of interest, the ability to alter genes in different ways and ask what is the outcome of that in terms of how the plant grows. Microscopy and imaging allow us to get down below the level of a cell to look at single molecules. So, we can ask where a single RNA of interest is located, which cell is it in, what part of the cell is it in, how many copies of that RNA are found in that cell and how does one cell type compare to another cell type?”

Meyers moved to St. Louis County in 2016 as part of a joint initiative between the Danforth Plant Science Center and MU to elevate plant science research in the Midwest. Since then, the partnership has generated a growing portfolio of innovations in plant genetics and biotechnology.

“For global challenges, there is climate change, pollution, expansion of cities, increasing populations and demands on finite resources, which puts a strain on our production systems and the environment,” Meyers said. “Plants are used for food, fuel and fiber, and are the key to a sustainable future, so we must ensure we are being good stewards of our precious resources to help farmers, the environment, and improve the human condition.”

Now with a family of his own, Meyers still tends to his personal garden where he grows cherry tomatoes.

“The joy of science is pursuing that curiosity and being able to feel and see the products of your work,” Meyers said. “The rate of scientific advances is always increasing, and it is exciting to be a part of it.”

Fall flowers usher out summer in a blaze of color