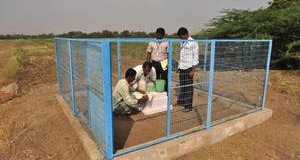 “Agriculture holds the key to solving two of the greatest problems now facing humanity: eradicating poverty and hunger, and contributing to maintaining the stable climatic conditions in which civilization can thrive,” he told participants at a roundtable on climate change during the World Government Summit in Dubai.

The FAO Director-General stressed in particular the need to support smallholder farmers in the developing world adapt to climate change.

“The vast majority of the extremely poor and hungry depend on agriculture for their livelihoods, he said, adding: “They are the most vulnerable to the impacts of global warming and an unstable climate.”

Innovative approaches exist that can help them improve yields and build their resilience, he said, such as green manuring, greater use of nitrogen-fixing cover crops, improving sustainable soil management, agroforestry techniques, and integrating animal production into cropping systems.

“But farmers face major barriers, such as the lack of access to credit and markets, lack of knowledge and information, insecurity about land tenure, and high transaction costs of moving away from existing practices,” the Director-General noted.

He pointed to the fact that 70 countries do not have established meteorological services as an example. FAO is working with the World Meteorological Organization to develop low-cost, farmer friendly services to address this need.

To withstand the vagaries of a harsher, less predictable climate, small farmers will also need better access to other sorts of technologies and to markets, information and finance — as well as better land tenure and improved agriculture infrastructure, added Graziano da Silva.

Ultimately, an ounce of prevention is worth a pound of cure, he argued.

“Adaptation to climate change makes economic sense: the benefits of adaptation are much bigger than the costs,” the FAO Director-General said, while underlining the importance of national efforts like the UAE’s strategy on food diversification, security and climate change.

Coping with the water crunch

One critical front for action is water management, according to Graziano da Silva. Millions of the world’s small-scale farmers are already wrestling with water scarcity, which will likely intensify as a result of climate change, he said.

This is why at the last UN climate change conference FAO and partners launched a global framework on water scarcity in agriculture that aims to support developing countries in bringing stronger policies and programmes for the sustainable use of water in agriculture online.

Participating in the panel discussion “Climate in Action: Feeding the Future” along with Graziano da Silva were Tshering Tobgay, Prime Minister of Bhutan, Thani Al Zeyoudi, Minister of Climate Change and Environment of the United Arab Emirates, and Patricia Espinosa, Executive Secretary of the United Nations Framework Convention on Climate Change (UNFCCC).

The World Government Summit (WGS) is a platform that brings together leaders and policy makers to showcase future trends in government services, leadership, innovation and economic policies.