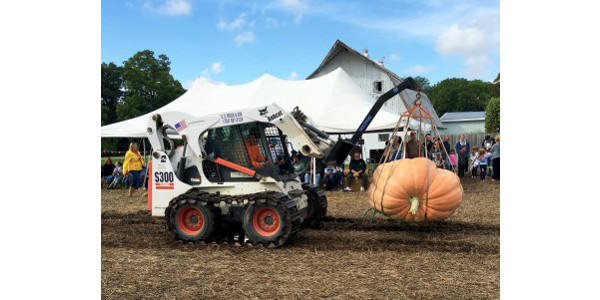 There are four deadly accidents associated with skid loaders and tractors with buckets. The most common is being struck by a lift arm, either going up or down. (Marissa Schuh, MSU Extension)

GOSHEN, Ind. — I participated in a farm safety program three weeks ago that was conducted by the Nappanee Amish community. There were representatives of fire departments, police, local hospitals, the health department, and businesses that offer health and safety services. Overall, it was a very good, family-oriented day.

My task was to talk about safety with machinery such as skid loaders that have buckets. I used a scale model skid loader to show how the center of gravity shifts as the load increases, as the bucket is raised or as loads shift, all of which can lead to tip overs. Even the smallest of bumps when a bucket is raised can lead to a catastrophe.

It surprised me that so many families had experienced bucket related accidents. In almost every case, a shortcut had been taken or the machine was overloaded. I probably heard 10 stories related to skid loader issues in a 3-hour time frame. There were a lot of young men and women at the safety program who have already experienced some skid loader near misses. I urge parents to take the time to teach the children how to operate the machine with safety in mind.

Just a week later, it happened to me.  A hydraulic hose suddenly burst on my loader, causing the lift arms to crash down. Fortunately, there was no cargo in the bucket, and no one was nearby.  Upon inspecting the hose, it had a small worn area, allowing a very rapid loss of pressure.

Bucket-equipped equipment is very useful on farms and in many of our local industries. Skid loaders in particular are very maneuverable in tight spaces, and can move a lot of materials very quickly. But the fact they have a small footprint, and squeeze a lot of hydraulics and levers into a small area, makes them among the most frequent sources of farm accidents. Too often, when the cause of the accident is investigated, the safety equipment or procedures were shortcut in the interest of time.

There are four deadly accidents associated with skid loaders and tractors with buckets. The most common is being struck by a lift arm, either going up or down. Often, these involve a machine left running. When the operator reenters the cab, the controls are bumped, and the person is pinned between the floor or the roof.   This can also happen when a person leans or reaches out of the cab.

The second most common accident is being crushed by a tip over.  This type of accident happens most when loads shift, or when operating in a sloped area.  The higher the bucket is raised, the more likely a tip over can occur.

Run overs are the third most common accident.  Unfortunately, this often involves children.  Visibility in the cab of a skid loader is often poor, and when a person approaches a working skid loader in a blind spot, there is great risk of injury or death.  Even the new machines, with fancy backup cameras and mirrors, still require the operator to take his eyes off the task at hand to look back.  Still, it’s worth the extra time to protect family and co-workers.

The fourth most common deadly injury in skid loaders is being struck by an object that falls from the bucket.  When the bucket reaches a certain height, the smallest of bumps can cause a bale of hay or a load of boards or logs to shift, and tumble back on the operator.  If the cab is compromised, or there is no forward protection on the cab, the operator can be crushed.

Simply put, never trust your life to the hydraulics on any machine, wear your seatbelt, do not circumvent the safety features, and try to keep the bucket as close to the ground as you can.