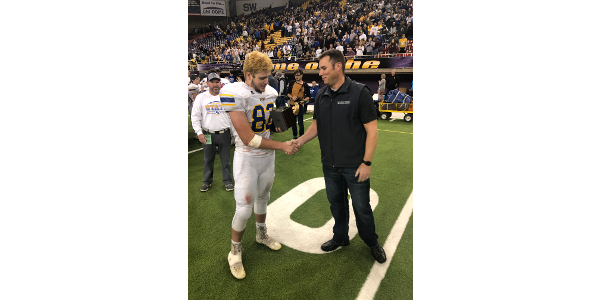 Carter Weber of Don Bosco High School, the winners of the 8-player tournament. Weber is a senior and the son of Eric and Stephanie Weber of Elk Run Heights. (Courtesy of IPPA)

HOG award winners were recognized for their strength and speed in creating opportunities for their teams to be successful.

“We sponsored the award for three reasons. First, we wanted to recognize the often un-sung linemen who are out front and helping their offense be effective,” said IPPA President Trent Thiele, Elma. “Iowa’s pig farmers also work to create opportunities for their industry and their communities to be successful.

“Communities, especially rural communities, are important to Iowa’s pig farmers,” Thiele said. “In our everyday work, we are bringing economic value to those communities, but by supporting Iowa high school sports organizations, we are also supporting efforts to support the camaraderie of communities that exists around their schools.”

“Third, we have a 10-year relationship with IHSSN, and we wanted to celebrate that with this new award,” Thiele said.

“The IHSSN is very excited to be a part of this award. Everyone we visited with about the Hog of the Game commented that the IPPA had knocked it out of the park with this type of recognition. We are also very proud to be associated with the IPPA for all these years. They have been a first-class organization to work with,” said Ken Krogman, president of IHSSN.

Iowa high school players who received the 2019 HOG awards are:

Walleye can be a valuable addition to aquaculture