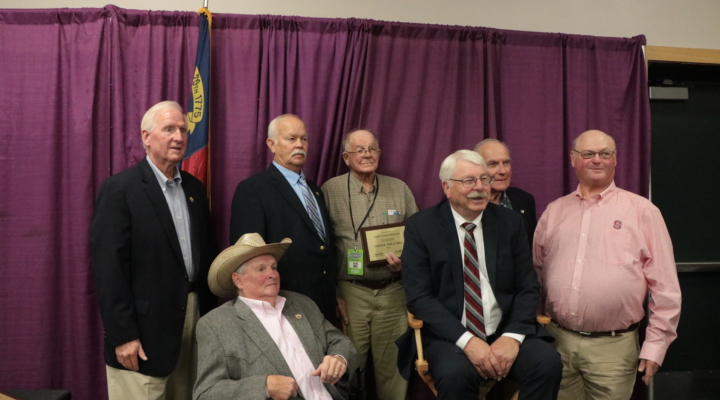 “This is one of my favorite events each year, because it gives me the opportunity to recognize the men and women who have helped to make our livestock shows some of the best in the nation,” Troxler said. “Today’s inductees join a select group that has been honored for outstanding support of agriculture and livestock at the N.C. State Fair.”

Frank Hollowell of Hurdle Mills was inducted into the swine category. He has been a fixture of State Fair hog shows for decades, and he has been involved in North Carolina agriculture for even longer. Hollowell began his career at the Extension Swine Husbandry program at North Carolina State University in the 1970s. He has put in hundreds of hours over the years at junior livestock shows around North Carolina to make sure they run smoothly, and has been involved in nearly every part of the hog shows from set up to tear down. Hollowell’s contributions have been vital in helping inspire the next generation of young people in agriculture.

David Lee of Zebulon was inducted into the swine category. He also began his career at the Extension Swine Husbandry program at North Carolina State University in the 1970s. Lee has become an invaluable part of the State Fair livestock shows over several decades of work. Lee has been responsible for assigning pens, setting up the unloading area, scales and ultrasound equipment, leading the ring crew in penning and moving hogs and more during the hog shows.

Sammy Jenkins of Apex was inducted into the horse category. Over nearly 40 years working at the fair, he has been many things, from exhibitor to vendor to volunteer. Jenkins sits on the North Carolina Horse Council, and has also been part of the Appaloosa horse club and American Quarter Horse Association. He has dedicated himself to building up the next generation of horse showers, and has lent young people his time, his expertise and his horses to help them start their own careers in the horse industry.

Freddie O’Neal of South Mills was inducted into the supporters category. He began his career at the Jones County Extension in 1979, before eventually moving to the Camden County Extension in 1989. O’Neal has been a consistent presence at the State Fair for many years, and has put hundreds of hours into helping livestock shows of all kinds flourish. Even after his retirement in 2003, O’Neal has given his time and energy to help kids with their livestock projects and cheer them on during shows.

Dr. Carm Parkhurst of Castalia was inducted into the Commissioner’s Meritorious category. Parkhurst passed away earlier this year, but the legacy he built over four decades at North Carolina State University is still felt even after his passing. As a professor of Poultry Science at North Carolina State University, his commitment to his students and deep knowledge of the poultry industry made him a beloved teacher and advisor. Parkhurst also worked at the fair for many years, and as recently as last year he still worked as general division director of the State Fair Poultry Competition.

Larry Wooten of Raleigh was inducted into the Commissioner’s Meritorious category. As president of the North Carolina Farm Bureau, Wooten has been one of North Carolina agriculture’s strongest allies for decades. He sits on the board of the American Farm Bureau Federation, and he serves as a member of the Board of the Southern Farm Bureau Life Insurance Company. Wooten has traveled in Europe, Africa and South America promoting trade and North Carolina agriculture, and he currently serves on USDA’s Ag Policy Advisory Committee. His vision and commitment to agriculture are reasons why he has become the highly-respected leader that he is.